DOOM Eternal's new update is live for both the PC and next-gen consoles, where on the Xbox Series X/S and PlayStation 5 next-gen consoles it'll add ray tracing -- while the PC side of things gets some awesome NVIDIA DLSS 2.0 lovin' that injects major performance into the game. 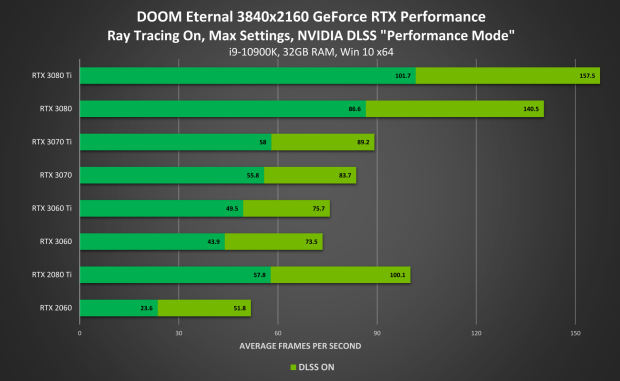 We're looking at up to 50% more performance with DLSS enabled and turned to Performance mode, but from my very quick testing there is no Ultra Performance preset for 8K which means the GeForce RTX 3080 Ti doesn't have the VRAM allocation ready for 8K gaming with DOOM Eternal at 8K. I'll have to play around with that more, and test the GeForce RTX 3090 exclusively thanks to the 24GB of GDDR6X memory on-board.

DOOM Eternal also has ray tracing on both consoles and the PC, with ray traced reflections inside of the campaign for DOOM Eternal -- increasing the graphics fidelity to another level. Enabling ray tracing will reduce performance, but that's why NVIDIA has its dark magik DLSS 2.0 technology, boosting performance by up to 50% at 4K in DOOM Eternal. 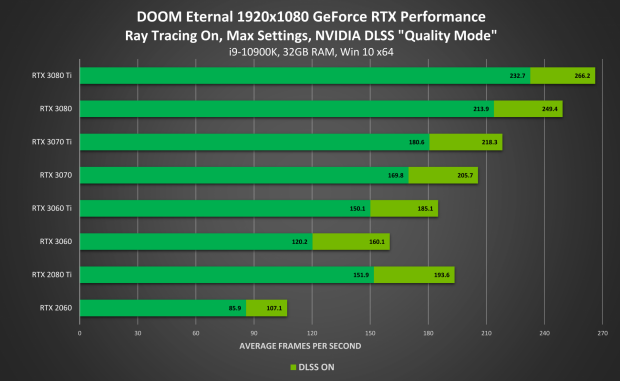 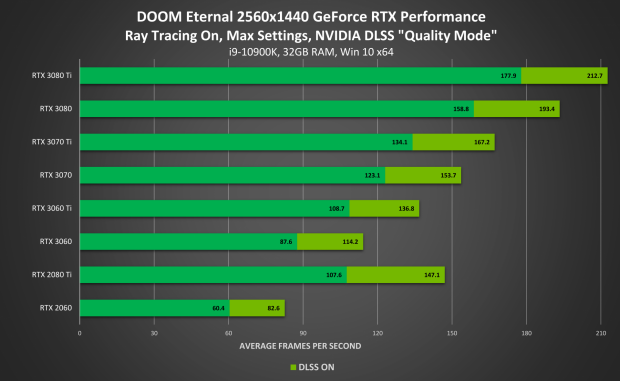 As for the performance gains that DLSS 2.0 brings, you can see those numbers above -- 1080p, 1440p, and 4K all experience the same fantastic performance uplifts that DLSS 2.0 delivers in other games. If you're gaming at 1080p then you won't need to set DLSS to Performance mode in DOOM Eternal, but rather Quality mode.

4K is an entire new ballgame, reducing the RTX 2060 to just 52FPS -- still playable, near 4K 60FPS with ray tracing at 4K thanks to DLSS. But the RTX 2080 Ti does extremely well here with 100FPS average -- while the flagship Ampere-based GeForce RTX 3080 Ti pumps away with 157FPS average.