Researchers are currently on the hunt to better understand the relationship between black holes and galaxies. 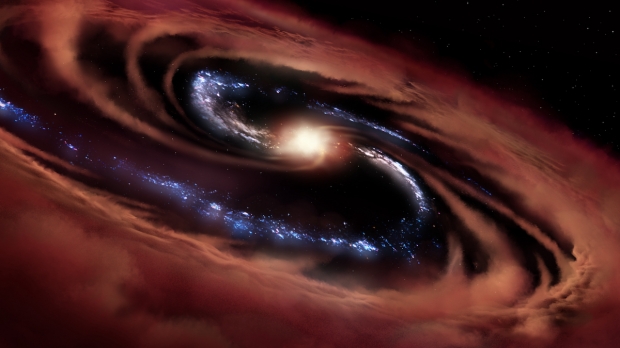 It's widely considered that most, if not all, galaxies contain a black hole at their center, but the reasoning behind it is still not fully understood by astronomers. However, a new study published in the online in Astrophysical Journal may reveal some new information, which could pave the way for astronomers to have a deeper understanding.

Researchers suspect that black holes and galaxies evolve together through what is described as galactic "winds". The winds are produced by a black hole's ability to swallow anything that is close to it. As objects are pulled closer, the black hole's gravitation pull accelerates the objects, which results in an energy release that ejects the drawn-in objects outwards.

Takuma Izumi, a researcher at the National Astronomical Observatory of Japan (NAOJ), said, "The question is, when did galactic winds come into existence in the universe? This is an important question, because it is related to an important problem in astronomy: How did galaxies and supermassive black holes co-evolve?"

The team of researchers used the NAOJ's Subaru Telescope in Hawaii and found 100 supermassive black holes and galaxy duos that are located 13 billion light-years away from Earth. For reference, the big bang occurred 13.8 billion years ago. Using Atacama Large Millimeter/submillimeter Array (ALMA), the researchers then found a galaxy named HSC J124353.93+010038.5 located 13.1 billion light-years away, and it was also discovered the galaxy has wind speeds of 1.1 million mph.

This galaxy is now the earliest known galaxy to have wind, breaking the previous record of 13 billion light-years.