A congressional hearing for the Senate Banking, Housing and Urban Affairs Committee's Subcommittee on Economic Policy is taking place -- with Massachusetts Sen. Elizabeth Warren saying some choice words about cryptocurrencies and Bitcoin mining.

Warren said there are 4 "significant problems" with cryptocurrencies, which are its fluctuating value, investment issues, illegal activity, and of course -- its cost to the environment.

Warren said: "Cryptocurrency has created opportunities to scam investors, assist criminals and worsen the climate crisis. The threats posed by crypto show that Congress and federal regulators can't continue to hide out, hoping that crypto will go away. It won't. It's time to confront these issues head-on".

"We had a chance to talk with experts, bring in a lot of senators around it, but the bottom line was that what's happening right now in cryptocurrency like Bitcoin and Dogecoin, it's a Wild West out there, and it makes it not a good way to buy and sell things, and not a good investment, and an environmental disaster. So do we need some regulation around this? You bet we do".

The fluctuating price of cryptocurrency is a major issue, with Warren questioning the director of the Digital Currency Initiative at the Massachusetts Institute of Technology, and Lev Menand, lecturer at Columbia Law School. Warren asked Narula if the cryptocurrency system itself was stable and reliable, with Naurla replying with:

"No it is not, unfortunately. We just witnessed the value of the entire cryptocurrency ecosystem dropping by about 40% over the course of the last two months".

What Bitcoin Did podcast host Peter McCormack tweeted in response is pretty much hitting the nail on the head -- Bitcoin itself doesn't use any energy, but the Bitcoin miners do. Bitcoin miners are buying energy supplies from the grid, with McCormack saying that Warren's issues are "certain forms of energy".

Then he comes in with the second zinger, adding: "I mean you are in government, surely you know this, and it is easily solved. Ban coal and invest in nuclear". 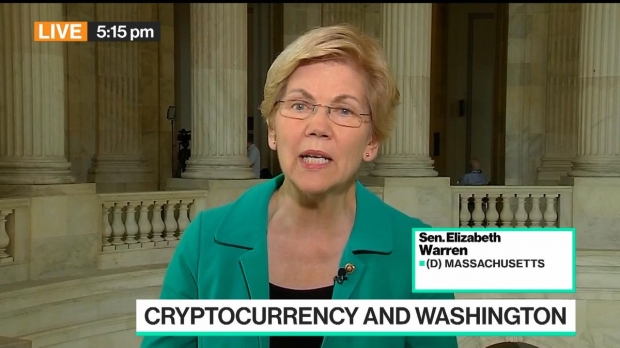