The Senate has passed the US Innovation and Competition Act, with the new legislation unleashing over $200 billion into scientific and technological innovations on US soil over the next 5 years.

The money will go into semiconductor manufacturing, R&D, next-gen chips, robotics, AI, and more. The US Innovation and Competition Act (USICA) legislation being passed means $52 billion for US-based semiconductor manufacturing, a 30% increase in funding for the National Science Foundation, and $29 billion for a new science directorate that will focus on applied sciences.

Senate Majority Leader Chuck Schumer, D-N.Y. said: "It's the largest investment in scientific research and technological innovation in generations. It sets the United States on a path to lead the world in the industries of the future".

He continued: "We've become far too complacent, and the United States commits less than 1% of its GDP towards basic scientific research. That's the fault of government, but it's also the fault of the private sector. The world is so competitive and global competition is so severe, companies feel they can't invest as much in the kind of research that might pay off profits five or ten years down the road".

Sen. Debbie Stabenow, D-Mich said: "We've seen what happens when our automakers and manufacturers depend on semiconductors made overseas alone. COVID-19 exposed the weaknesses in our supply chains, both our medical supply chains and our manufacturing supply chains".

Intel's freshly-minted CEO, Pat Gelsinger, has already weighed in on the situation, where he said: 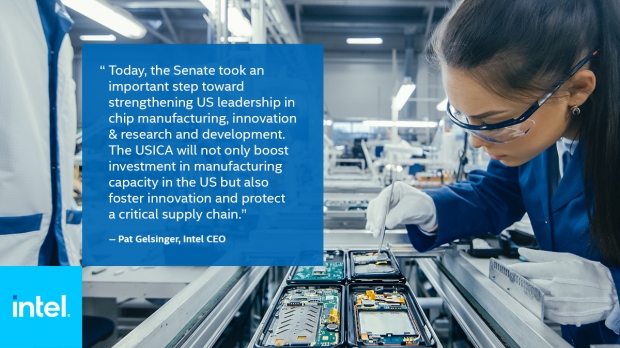