I'm sure there will be thousands of people that will read this and be angry that they haven't been able to buy a new AMD Radeon RX 6000 series or NVIDIA GeForce RTX 3000 series graphics card... yet sales are still sky-high in Q1 2021. 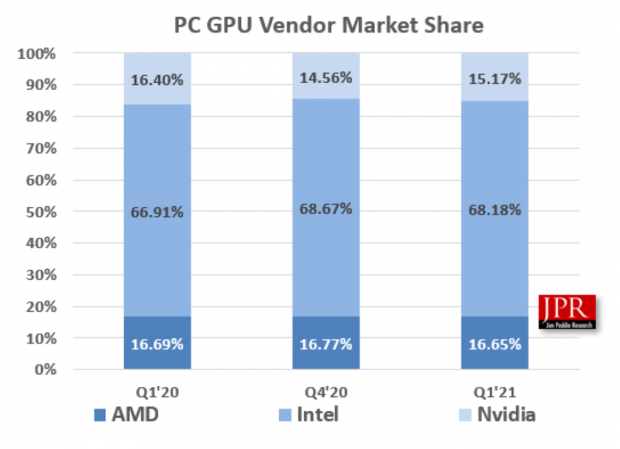 John Peddie Research has some numbers to share, with 119 million graphics cards shipped in Q1 2021 -- a 39% increase over Q1 2020. This is pretty damn astonishing, for a few reasons: there is a gigantic everything shortage right now -- multiple parts to build these graphics cards are super hard to find right now.

Not only that, but the market is insane when it comes to pricing right now -- with NVIDIA pricing its just-launched GeForce RTX 3080 Ti Founders Edition at $1199... yet the RTX 3080 Ti can be found for $2500+ in some markets. Second-hand prices are just as insane right now, the entire market is a Bizarro world... yet GPU sales are record high.

Q1 2021 isn't too different, with AMD now having 19% of the discrete GPU market and NVIDIA with 81% leaving Intel with nothing. Intel will enter the market this year with its new Xe-DG2 gaming-focused GPU and even then it'll be months, and if not many years before Intel is near double digits.