We heard plenty of those rumors ourselves from one source to the next and at one point, we were even so sure it was going to happen we even started saying you could probably look forward to X38 supporting SLI. Sadly though, all these rumors are untrue!

During Computex back in June of this year, a couple motherboard companies slipped up and claimed that their X38 boards would support SLI. Technically and as far as the hardware goes, X38 does support SLI but it is not officially sanctioned at all by Nvidia. During a drunken Taipei rampage last year in a place which will be left unnamed, we asked the question to an Nvidia senior rep who is high up on the food chain and the answer was something along the lines of that Intel would never get a SLI license unless Intel gave them a free CPU bus license in return (loosely quoted). Of course, neither are likely to ever happen. 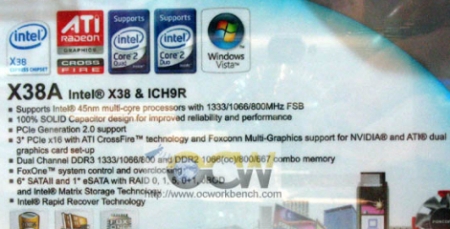 One of the companies during Computex highlighting the fact that their X38 would support SLI was Foxconn. We were able to get hold of a Foxconn rep for comment who mentioned it was a slip up and Nvidia got angry at them. The real reason they mentioned it was because X38 can physically support SLI just there is nothing official from the Nvidia side - and of course, we are talking about drivers. Some motherboard companies believe that end-users (famous overclockers) are close to easily modding Nvidia drivers to support SLI on any platform.

It is a shame for users and it would really make X38 the truly ultimate platform but at the same time, if Nvidia gives SLI to Intel, their chipset business goes down the toilet, all the way down.