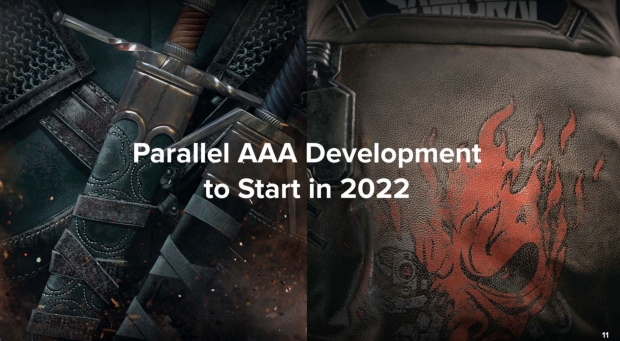 Starting in 2022, CD Projekt plans to start working on two projects simultaneously across its two IPs, The Witcher and Cyberpunk. The new games are expected to be another Witcher title, possibly The Witcher 4 or a prequel, and Cyberpunk 2077's anticipated AAA multiplayer mode. Now the company gives a few updates on what's happening behind the scenes.

"As we announced during the strategy update, we are planning to start parallel AAA development from 2022. This year is a year of transformation. There is much more work on Cyberpunk. Of course a big part of the team is still working on Cyberpunk," Kicinski said.

"But definitely, there are teams preparing future unannounced projects, I would say that 1/3 of the Cyberpunk team or AAA content team is working on unannounced games. But it's not like we are in parallel AAA development--it's rather preparation for future works and [full] not development per se."

Kicisnki adds more color to his statements with a follow up:

"Nearly half of Cyberpunk team is still continue working on Cyberpunk itself and Cyberpunk next-gen addition.

"Then we have teams working on unannounced games still. I'm not very precise because we don't want to pre-announce anything which is not announced yet. So I'm not referring directly to the question, but there are teams, smaller teams in transformation, preparing works on future content.

"But I can just repeat what I've already said that next year is the year when we want to split teams and to work full scale, of course, depending on the project in the different phases on future AAA content."

These projects will not be ready for years down the road, and until then CD Projekt plans to fix Cyberpunk 2077 so that it can continue sale on the PlayStation Store, as well as release next-gen patches, expansions, and free DLC for the game.