The COVID-19 pandemic has wreaked havoc in places most wouldn't expect, where economically millions of Americans are enjoying more money in their pockets each month from the US government than they are in minimum wage jobs. 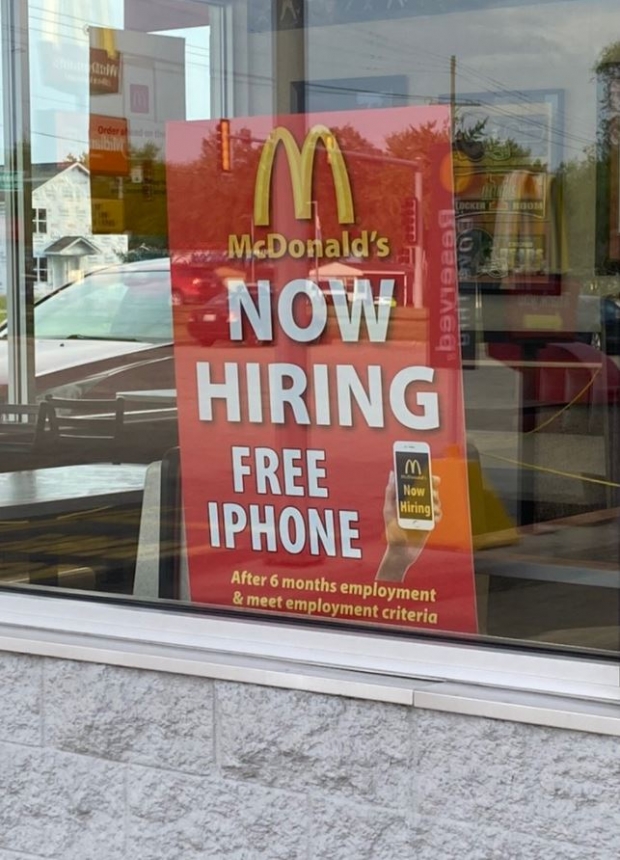 The situation is so bad that in Illinois that a McDonald's restaurant has thrown up a sign at the front of their store that reads: "Now hiring. Free iPhone". Under that, McDonald's explains that the free iPhone is only "after 6 months employment" and you must meet their "employment criteria".

Corporations offering an incentive for something like this -- a free iPhone to just stay at your job for 6 months -- will most likely become the norm over the coming years. The big corporations are bleeding money as Americans aren't eating out, driving around, and consuming as much as they used to when out and about... well... because not many Americans can be out and about right now.

The Biden administration only makes things worse with the US government handing out trillions in debt for future generations for the Americans of today to survive, the issue is that money is more than they'd get working minimum wage jobs so Americans earning $7 an hour at McDonald's are going to be thinking "uh, yeah f*ck that" when they can receive double, if not more in stimulus checks.

Millions of Americans aren't working right now and millions of Americans don't want to work, there is a huge labor shortage and there's no fix in sight -- well, maybe a free iPhone if you stay in that job for 6 months or longer. But what happens after those 6 months? How sharp do McDonald's numbers drop in month 7, month 8, month 9, and so on.

During CNBC's "Power Lunch" on Tuesday, CEO of hospitality and gambling empire Landry's, Tilman Fertitta, said that his companies were busier than ever before... but the government handing out weekly stimulus checks are "killing" companies through a labor shortage.

Fertitta explained: "Everybody's getting the extra $300, people aren't working so they are going out and they are having dinner and they are going to the casinos, but at the moment I can't find employees. We are truly struggling, and that is what is causing a lot of your inflation right now. You don't have the workers. You have to slaughter 660,000 cows a week to keep up, and if you only slaughter 620 or 630, that is why beef is up. Everything is up, every product there is".