Elon Musk is on fire on Twitter this morning, first off blasting a tweet about Dogecoin and that developers who want to help with Doge can submit ideas to GitHub and the /r/dogecoin subreddit.

Musk added that this would be "potentially promising". Given the fact that Ethereum will soon be 7000x more efficient than Bitcoin, much of it related to energy costs. Bitcoin also saw a nice bump in its price, rising from $38,000 or so through to $39,800 or so with Musk's tweets while it dropped down to $38,400 at the time of writing.

MicroStrategy CEO Michael Saylor tweeted that after meeting with Musk over the weekend and "leading Bitcoin miners in North America" the group formed the Bitcoin Mining Council.

Argo Blockchain CEO Peter Wall is involved, tweeting: "as a founding member of the Bitcoin Mining Council, Argo will push hard for sustainable mining and more transparency. This is the way!"

Marathon Digital Holdings executive chairman Merrick Okamoto tweeted that his company will be doing what it can "to contribute to sustainable mining and transparency". 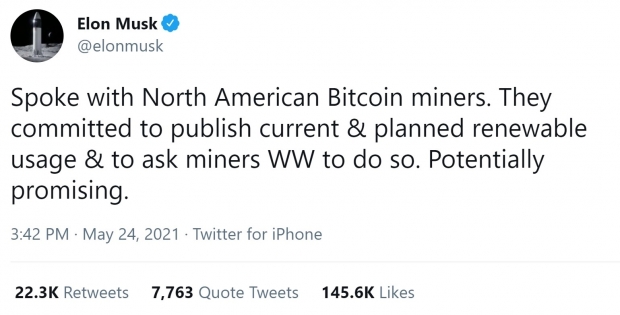