Samsung has announced that construction of a new production line has started and that the company expects the plant to be operational in the second half of 2022. This is part of a $151 billion investment into Samsung aiming to be the world leader in advanced semiconductor technology against the likes of so-very-dominant TSMC, Intel, and others. 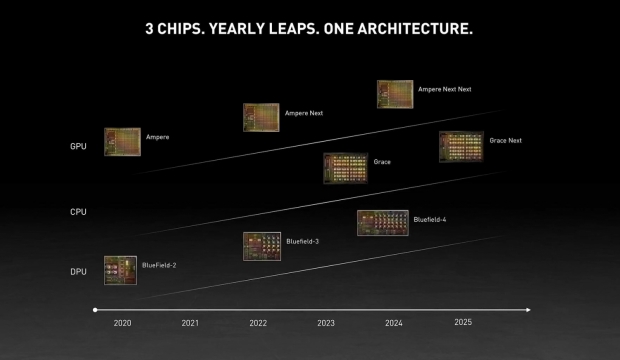 The new state-of-the-art facility will be making 14nm DRAM and 5nm logic semiconductors, both of which will be based on extreme ultraviolet (EUV) lithography technology. NVIDIA's next-gen Hopper GPU architecture will be made on 5nm and according to my sources, NVIDIA suffered the blows it has taken with Ampere on the 8nm node from Samsung -- against TSMC and its 7nm node for AMD with Radeon (and Ryzen) because after that, it could get to tap Samsung's new 5nm tech.

Ampere Next is expected in 2022 while Ampere Next Next will drop in 2024 -- 2022 lines up perfectly with Samsung's new 5nm fab plant up and operational in the second half of 2022. According to the first batch of rumors, NVIDIA's next-gen Hopper GPU architecture was coming next... as an MCM (multi-chip module) similar to the chiplet technology used by AMD on its Zen-based CPUs.

But then the rumors started changing and NVIDIA's new Ada Lovelace GPU architecture was coming next, and could be the monolithic GPU made on Samsung's next-gen 5nm node coming in the second half of 2022. Lovelace could be what NVIDIA is calling Ampere Next, while Hopper could be Ampere Next Next.

Dr. Kinam Kim, Vice Chairman and Head of Device Solutions Division at Samsung Electronics said: "The entire semiconductor industry is facing a watershed moment and now is the time to chart out a plan for long-term strategy and investment. For the memory business, where Samsung has maintained its undisputed leadership position, the Company will continue to make preemptive investments to lead the industry".