Anyone that has been gaming for 20+ years will have lived through so many promises that photorealistic graphics were right around the corner... well, with the advancements of AI and a team of researchers at Intel... we're closer than ever before. Check this out:

A team working out of the Intel Intelligence Systems Lab, which is a division that is wholly dedicated to researching all things artificial intelligence (AI), machine learning (ML), and robotics at Intel. The authors behind the new piece wrote in their introduction to the research article:

"Photorealism has been the goal for video game graphics for half a century and recent advances in the world of artificial intelligence allow for better".

The team used modified images from GTAstar and then fed homegrown AI with the Cityscape database which is filled with countless pictures of a real-world urban environment in Germany. The results well and truly speak for themselves, as the AI then pulls apart the images within GTA and sorting them into multiple "layers". 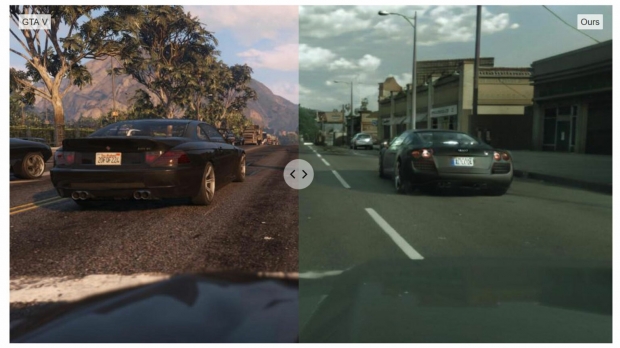 From there, the rendering pipeline can be inspected at a greater level down to details like the lighting and illumination of a particular scene, the back and distances of the camera, and the brightness of 3D objects. The AI then superimposes images from Cityscape onto GTA, with mind-blowing photorealistic graphics as the result.

The researchers put a considerable amount of time into this AI-powered project, as it was very powerful in its original form to the point where it would produce random results like putting Mercedes jewelry into all cars because the Cityscape data being fed into it was from Germany -- where Mercedes cars are found in droves.

At that point, the researchers stopped the AI from analyzing the full contest of the image, but rather smaller pieces to segment each picture into the game and match them with real-world photos. This means that smaller elements of the landscape in Grand Theft Auto -- things like a cyclist, or the dividing line on a highway or road, will be matched with images on Cityscape.

The result of all of this... is pretty damn incredible and I really, really want to see more of this.