China's Long March 5B rocket recently re-entered Earth's atmosphere, with the majority of the rocket burning up before remnants hit the Indian Ocean. 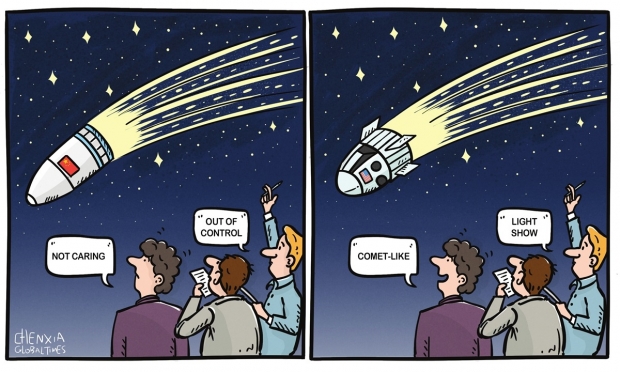 Now, Chinese media is firing back at the United States and NASA, saying that it's "anti-intellectual" to claim that debris from the out-of-control Long March 5B rocket was "risky". Global Times has published an op-ed that states, "During the nearly 60 years of space activities, the calculated fall of rocket debris has not caused casualties so far. In addition, the risks of falling rocket debris are the same, no matter whose rocket it is. It is seriously anti-intellectual to claim that China's rocket debris is especially risky."

Foreign Ministry spokesperson Hua Chunying said that China was tracking the rocket's trajectory and issued public statements on its situation in advance. Additionally, Hua claimed that Beijing was being treated unfairly and pointed towards the debris that fell to Earth in Washington from a SpaceX launch in March. "American media used romantic rhetoric like 'shooting stars lighting up the night sky. But when it comes to the Chinese side, it's a completely different approach", said Hua.

Hua added, "We are willing to work with other countries including the United States to strengthen cooperation in the use of outer space, but we also oppose double standards on this issue."