The PS5 has sold-in (shipped) 7.8 million units in Q3-Q4, Sony reveals, which is about 200,000 more units than its predecessor. Comparatively, Sony had shipped 7.6 million PS4s through Q3-Q4 FY2013. Sony expects to sell over 14.8 million PlayStation 5 consoles in FY2021, company CFO Hiroki Totoki reveals.

The company made 517.1 billion yen (roughly $4.9 billion) from PlayStation 4 and PlayStation 5 hardware sales in FY2020, roughly 12% of total gaming earnings. 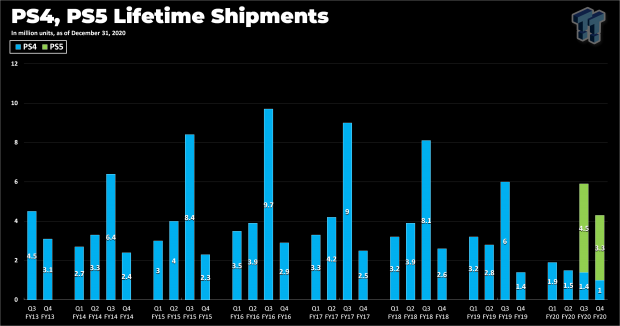 Supply remains constrained and should remain that way until at least the second half of 2021, as AMD's Dr. Lisa Su admits current inventory channels are low. AMD is ramping up production of PS5 console processing chips in an effort to meet demands. Sony affirms it is working closely with supply lines and manufacturers to meet demands of gamers.