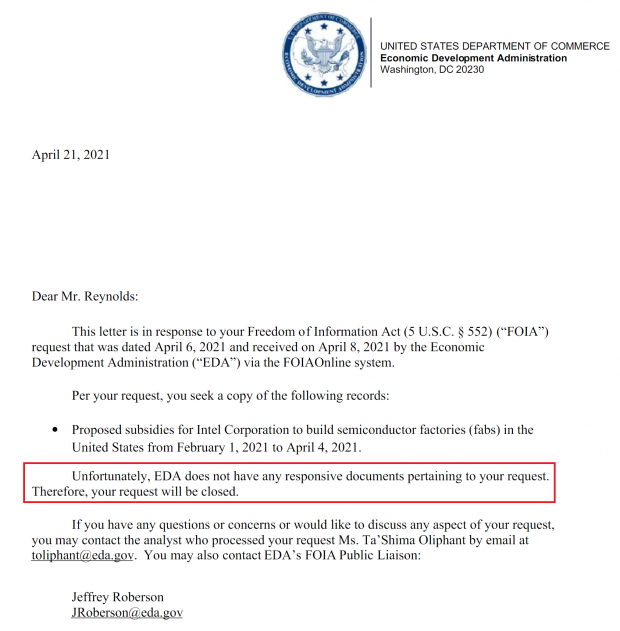 According to new FOIA requests submitted by Sam Reynolds on behalf of our friends over at Wccftech, there are "no records or documents suggesting that Intel is getting any government money. TSMC, on the other hand, is receiving support from Arizona - although this is unrelated to the CHIPS Act".

Intel is keen to get semiconductor foundries built on US soil, a move that would drastically boost domestic supply of chips -- with Intel reportedly set to receive 10-digit ($1 billion to $9 billion... a "staggering large" number indeed) in subsidies from the US government. This money isn't coming over, and through the new FOIA requests we still have no idea when it will start flowing into Intel.

Intel's freshly minted CEO Pat Gelsinger has met with President Biden, but it hasn't shifted the needle at all -- Wccftech notes that there is "no formal legislative proposals for money directed towards Intel". This pushed Wccftech to run a few Freedom of Information Act (FOIA) requests to see what Washington was doing.

Reynolds explains after receiving the replies to his FOIA requests that "there was nothing".

Not only is Intel dry on its promised subsidies from the Biden administration, but the Semiconductor Industry Association -- the lobby group for "Big Silicon" in DC -- has been proposing to lawmakers how the companies it represents might spend that money... it hasn't so far as the money isn't flowing.

You can read the entire story over at Wccftech.