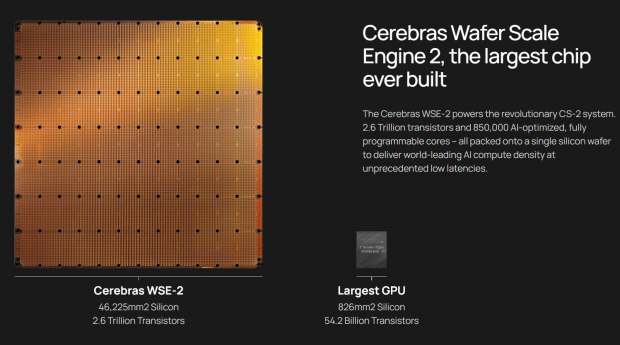 We already knew that the next-gen Cerebras WSE-2 packed an insane 850,000 cores ready for AI work, and an even-more-insane 2.6 trillion transistors (yeah that's trillion with a T). Cerebras' new details on the WSE-2 include the fact that it has 40GB of on-chip SRAM, 20 petabytes of memory bandwidth, and 220 petabits of aggregate fabric bandwidth.

The new WSE-2 is the largest chip ever made, packing 2.6 trillion transistors and 850,000 AI-optimized, fully programmable cores. Cerebras crams all of that into a single silicon wafer, all on TSMC's 7nm process. The entire chip is simply gigantic -- and while it's the same 46,225mm2 as its predecessor in the WSE-1, the new WSE-2 packs some gigantic upgrades. 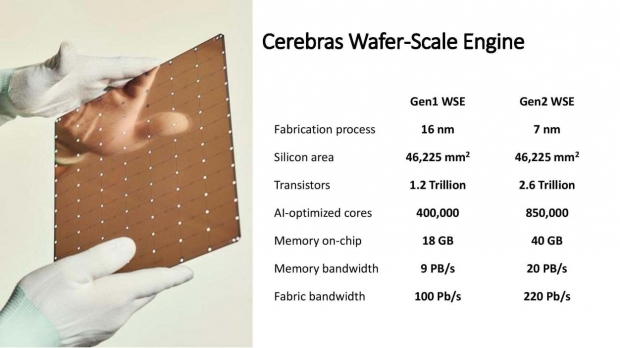 Cerebras has upgraded the WSE-2 across the board, dropping down from the 16nm process to the newer 7nm process we might have the same 46,225mm2 silicon area but transistors have over doubled from 1.2 trillion to 2.6 trillion as too have the AI-optimized cores that over double from 400,000 cores to 850,000 cores.

There's over double the on-chip SRAM with the original Cerebras WSE-1 packing 18GB, the new WSE-2 has 40GB while memory bandwidth leaps up from an already crazy 1.9PB/sec (yes that's a P) up to an even crazier 20PB/sec, with fabric bandwidth over doubling as well from 100Pb/s to 220Pb/s. 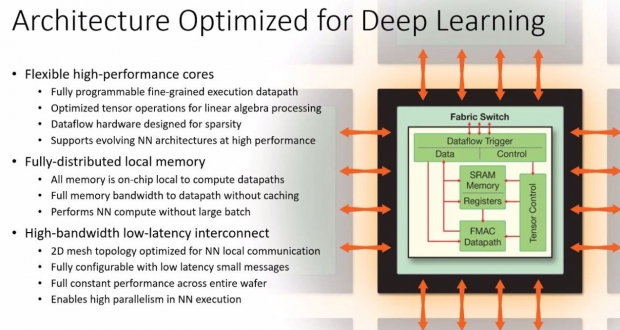 Cerebras says that the new WSE-2 chip will have a clock range between 2.5GHz and 3GHz, but the new chip packs over twice the performance over the WSE-2 while using the same power. That's a pretty big deal for a chip like this.

Cerebras has its new WSE-2 working in systems right now, with availability of the WSE-2 aimed for Q3 2021.