ESO's new Update 30 in June will roll out a new mode called Endeavors that gives you a new currency for completing various daily and weekly objectives. The currency--Endeavor Seals--can be used to buy items contained in lootboxes. This is the first time that players are able to acquire these items without spending money.

Players can also buy items found in Crown Crate directly, not with the game's premium Crowns currency. These items instead cost a secondary layered currency called Crown Gems. These gems are only acquired if you A) open a crate and get something you already own or B) break down Crown Crate items you don't want to use. This aims to create a significant monetization loop aimed at recurring purchases. 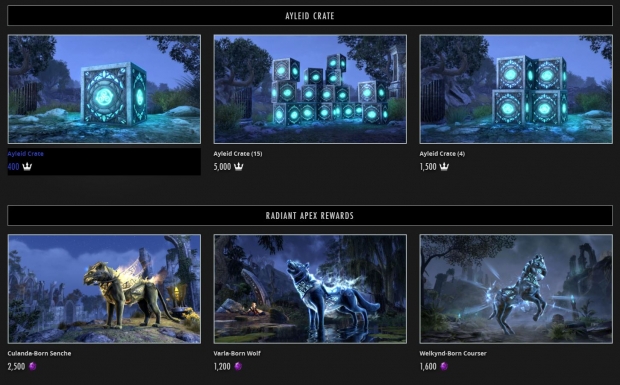 Now gamers can just do a bunch of Endeavors and save up their Seals to buy these items. Exact exchange rates remain unknown, but it's a nice touch for players who don't want to spend any extra money on microtransactions.

With the new Seals currency, you can acquire any of the currently available Crown Crate items. This includes any of the crate's consumables (such as potions or XP scrolls), pets, cosmetics, or even its extremely rare Radiant Apex mounts.

The Seal value for individual Crown Crate items differs, so depending on what you want to get, you might need to save up if you wish to acquire an especially rare item. You can collect and save Seals for as long as you like, and if there's nothing that takes your fancy right now, there is no cap to how many Seals you can save for later. Like crowns or gems, Seals of Endeavor are an account-based currency and not specific to any one character.