The new Mass Effect Legendary Edition gives a big facelift to the classic trilogy. BioWare has put together a side-by-side footage reel showing these changes, including graphical upgrades and gameplay tweaks.

The upcoming Mass Effect trilogy remaster (releasing May 14) effectively upgrades the original games with high-res 4K textures, new shadow and lighting effects, and a myriad of other adjustments. Some of these enhancements are quite impressive and add a new dimension to the game, but others change the tone, ambiance, and overall presentation of specific scenes.

To illustrate how the game will look on PS4, Xbox One, and PC (and on PS5/Series X), BioWare gave IGN a bunch of comparison footage that highlights the updated performance. The results are pretty eye-opening. Apart from the obvious texture and environment boosts, the biggest change has to be loading times; the Legendary Edition loads elevator sequences 73% faster than the original.

We can expect even faster loading times on the PS5s and Xbox Series X's SSDs.

Check out the major changes coming with the Mass Effect Legendary Edition here. 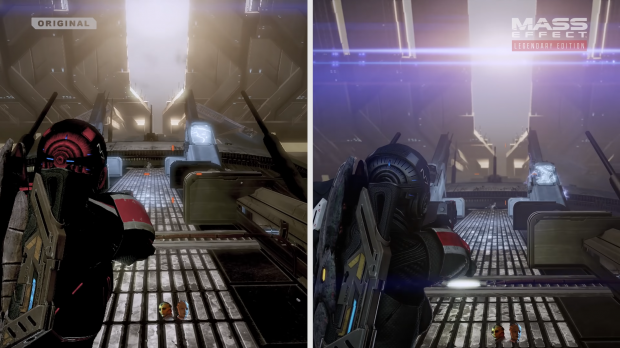