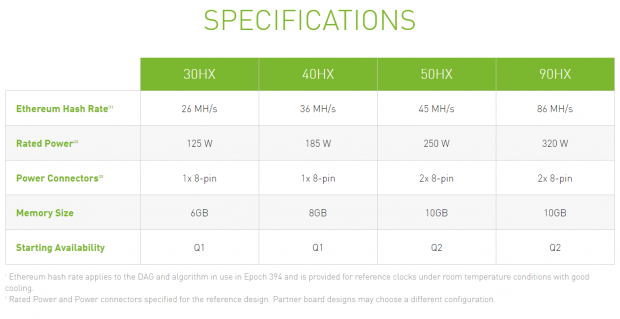 Hut 8 Mining Corp. will have the first batches of NVIDIA's new CMP mining cards arrive in May, with all of the GPUs expected to be installed and cranked up into mining Bitcoin by the summer. Hut 8's mining capacity will be expanded by 1600GH/s which is the same as around 13,333 x NVIDIA GeForce RTX 3090 graphics cards when it comes to mining hash rate power (they do around 90-120MH/s each).

CEO Jaime Leverton explained: "The adoption and the development of applications interacting with various blockchain networks have never been stronger, opening many possibilities across a variety of industries. We are incredibly excited to have these high performance CMPs in our fleet. We believe mining with CMPs will open up new opportunities for Hut 8 and will allow us to continue to execute on our long- and short-term plans for increased and diversified revenue streams".

We don't know which of NVIDIA's new CMP mining GPUs that Hut 8 will be receiving, but with 1600GH/s of mining power on the way I'm sure they've chosen some super-fast mining GPUs to put into their crypto mining farms.