Since Apex Legends' release, gamers have been wondering if titans from the Titanfall franchise will ever make it into EA's battle royale. Well, it might just happen.

Dataminer Biast12, who is known for finding Season 7's new legend Horizon before the release, has found something quite interesting in the game files. Biast12 posted what was found to Twitter, and as you can see from the above video, the new character Blisk has an ultimate called "Standby for Titanfall". Upon using the ultimate, the player can summon a titan from the Titanfall series to provide covering fire to an area.

Additionally, we also have gotten a look at Blisk's abilities, and from the provided screenshot that can be found below, we can learn that Blisk's passive is a Pilot Kit. This passive has been taken straight out of Titanfall and provides Blisk with the ability to hack Survey Beacons and also wall run. Blisk's tactical ability allows him to create a damaging zone that is powered by the arena's ring. It should be noted that none of these leaks have been confirmed by Respawn, so take them with a grain of salt. 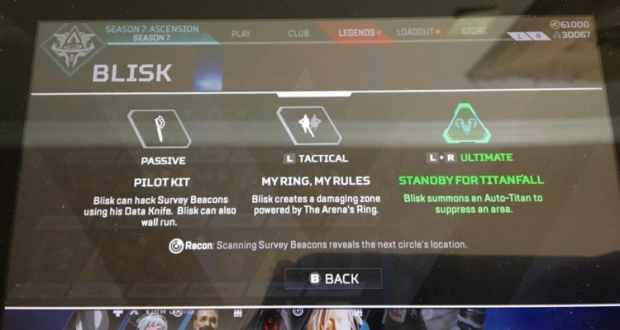