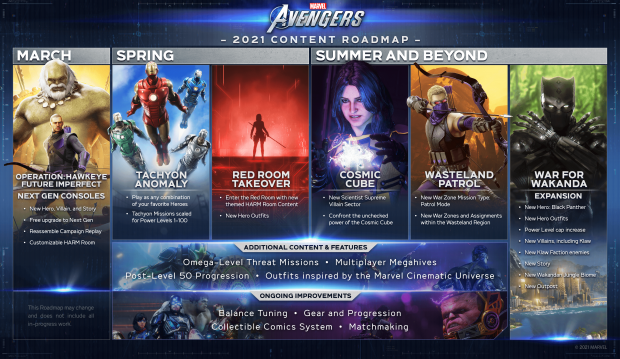 Now that Avengers is on PS5 and Xbox Series X, the team can push towards its most important goal: engagement. "Our focus moving forward is to deliver new content that is compelling to play and replay again while offering better rewards," Crystal Dynamics wrote on its new Avengers blog post. The developer plans to make good on its promise with regular seasonal updates with new activities, cosmetics, rewards, and eventually, new heroes and story arcs. All future content is 100% free for Marvel's Avengers owners.

The roadmap cadence follows most live games, with multiple smaller-scale updates set in between sizable expansion-sized content. Avengers' next-gen port released alongside Operation Hawkeye, the current expansion-level update that adds a new playable character (Hawkeye) as well as a new narrative storyline. The next big expansion-sized update, War for Wakanda, will introduce Black Panther as a playable hero in late 2021.

Black Panther is coming in 2021 along with more Villains like Klaw, a new enemy Faction, the Wakandan Jungle Biome, a new Outpost, a Power Level cap increase, and much more. This will be the biggest content drop since launch. We can't wait to show you everything that is coming with Wakanda.

Crystal Dynamics also promises tons of tweaks, adjustments, and changes based on player feedback. The most recent change to EXP level ups was widely criticized among players and the team might have a long way to go before its players are fully satisfied.

The devs say this is just the beginning, and there's lots more content in the works:

"Our team is committed to improving Marvel's Avengers, beginning with these upcoming additions to the game. This is only the start of our future plans and, as stated previously, not everything we're working on. We'll be sharing more details over these coming months, so keep an eye out on our official channels. We hope this roadmap offers you a bit more knowledge into what we're focusing on as we continue development day in and day out in order to make Marvel's Avengers the game we know it can be."