It seems all that kerfuffle over NVIDIA's new mid-range GeForce RTX 3060 being a crypto mining rig beast is done and dusted, first it was supposedly secured by a handshake between the driver and BIOS that gimped the ETH mining hash rate power of the RTX 3060... and now it's gone?! 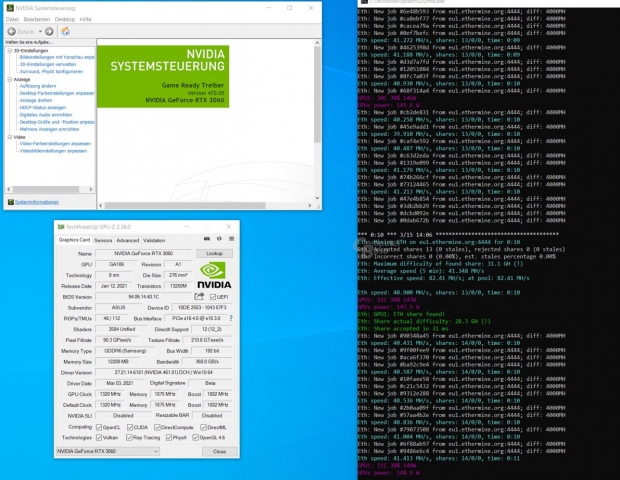 According to ComputerBase and HardwareLuxx who have both tested and played around with NVIDIA's new GeForce 470.05 drivers, which reportedly see the Ethereum hash rate limiter disabled. It was previously reported that you couldn't simply remove the hash rate limiter on the GeForce RTX 3060 by driver alone and required new firmware... but it seems it can be done.

The new driver isn't available to the general public just yet as it is available through NVIDIA's internal BETA program, with ComputerBase reporting: "ComputerBase can confirm that only the beta driver GeForce 470.05 distributed by NVIDIA to developers and via the Windows Insider Program ensures that the performance of the GeForce RTX 3060 in the Ethereum algorithm no longer drops. A BIOS update is not necessary".

It's being reported that with multiple GeForce RTX 3060 graphics cards in a single system with the GeForce 470.05 drivers installed that the hash rate drops. I think I'll need to do some experimenting on this once I'm finished with this wave of custom AMD Radeon RX 6700 XT graphics cards -- that have no mining restrictions, by the way.