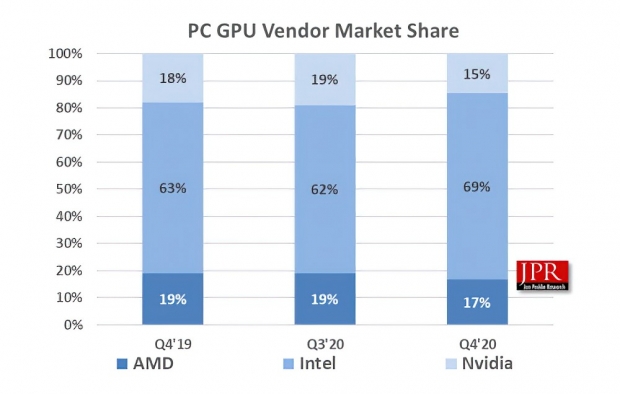 But the issue is, you just can't buy Radeon RX 6000 series graphics cards right now. If you thought buying an NVIDIA GeForce RTX 30 series card was hard, Big Navi is a Big Hassle to find worldwide.

The reason? AMD's entire 7nm silicon allotment from TSMC (Taiwan Semiconductor Manufacturing Company) would be pushed into their semi-custom SoCs for Sony and the PlayStation 5, as well as Microsoft with the Xbox Series X/S consoles. Not only that, but AMD is using that 7nm silicon for its Zen 3 processors, Zen 3, EPYC, Threadripper, and everything in between.

Radeon is a much smaller importance for AMD, with less profits in it right now given how quickly the cards are selling out worldwide during this shortage. Analyst firm Jon Peddie Research points out that AMD's overall market share percentage from Q3 2020 to Q4 2020 dropped 2.2%. 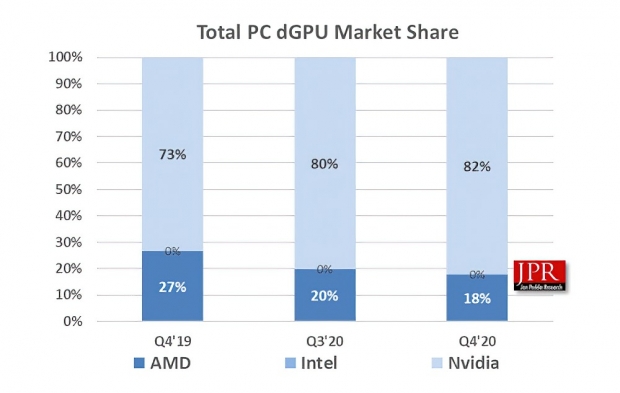 JPR president himself Jon Peddie explains: "Factors influencing the robust sales of AIBs in the past two quarters have clearly been increasing growth in gaming, and the need to outfit home offices due to COVID. There has been speculation that there might be a renewal in demand for AIBs due to crypto mining. Anything is possible, but the power consumption of AIBs greatly diminishes the payoff for crypto-mining. Ethereum, the best-suited coin for GPUs, will fork into version 2.0 very soon, making GPUs obsolete. A person would be very foolish to invest in a high-end, power-consuming AIB for crypto-mining today".