Nubia's new RedMagic 6 gaming smartphones are split into the RedMagic 6 and RedMagic 6 Pro, which both sport a 6.8-inch 1080p AMOLED display at an insane 165Hz -- a world-first. The 1080p 165Hz mobile panels have "the industry's highest touch sampling rate" which is 500Hz for single finger and 360Hz for multi-touch.

Nubia is also debuting a next generation cooling system for its RedMagic 6 gaming smartphones, with the company detailing it: "The built-in high-speed centrifugal turbofan can reach up to an astounding 20,000 rom and the canyon air duct design for airflow increases the air heat transfer coefficient by 500%. There's also a large copper foil, covering the battery, while a vapor chamber (the world's thinnest at 0.33mm) sits behind the motherboard, connected by thermal paste". 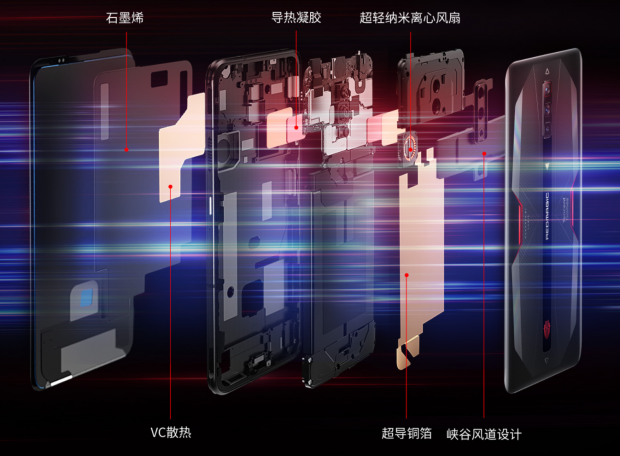 The fan is silent according to Nubia, battery wise the RedMagic 6 Pro has a 4500 mAh unit that can recharge in 17 minutes at a blistering 120W... the RedMagic 6 has a bigger 5050 mAh battery with 66W charging tech.

Speaking of 18GB of RAM... it should happen, with Ice universe reporting there is a version of the RedMagic 6 gaming smartphone with 18GB of RAM and 512GB of storage that will cost $1200... quite a big upgrade, but what a damn powerful tech-packed gaming smartphone.