We all know how cryptocurrency mining is huge again, with reports quickly surfacing that Sony's next-gen PlayStation 5 console has been hacked to support crypto mining and that it can crank out 99MH/s of mining power... well, the reports are totally fake. 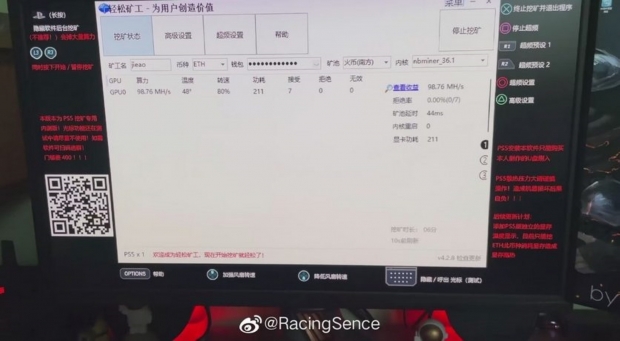 The rumors of course began on Chinese forums that claimed the PS5 was hacked to support NBMiner, an Ethereum mining algorithm that was reportedly capable of 99MH/s. This would've been an incredible feat considering a tuned AMD Radeon RX 6900 XT graphics card sits at around 60MH/s mining.

The reports stated the hacked PS5 was pulling 99MH/s with the console drawing around 211W while it mined which would be impressive compared to the RDNA 2-based Radeon RX 6000 series flagship graphics cards. You can tune and overclock the Radeon RX 6800 XT and Radeon RX 6900 XT graphics cards but you'll find it impossible to bump over 60MH/s mining crypto.

It seems outlets have no issues reporting this fake news as real... but if you thought a cutdown semi-custom APU inside of a thermally-limited and power-limited PlayStation 5 console would totally obliterate an AMD Radeon RX 6800 XT or the flagship Radeon RX 6900 XT -- both with their Infinity Cache of which the PS5 does not have at all -- then you'd be wrong.

Virtually 100MH/s out of the PS5 at 211W would see every crypto miner in the world buying every single PlayStation 5 console ever made no matter the cost at that point.