NVIDIA announced its surprise new crypto mining processors last week, with the new CMP models using unknown GPUs at the time -- but now we have the bigger picture. 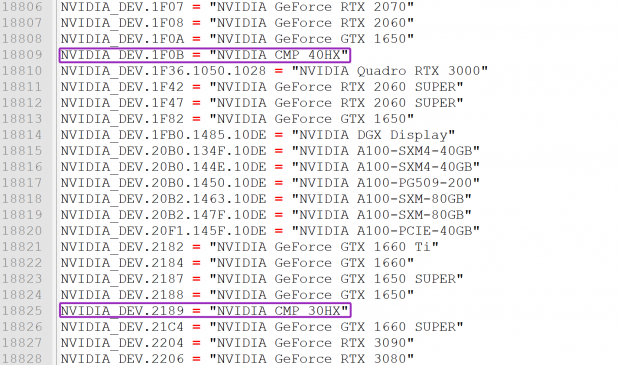 Inside of the new GeForce 461.72 drivers it has been confirmed that NVIDIA is re-using the Turing GPU architecture for the two lower-end CMP designs, with the CMP 30HX and CMP 40HX Crypto Mining Processors both using a Turing GPU. NVIDIA's new CMP 30HX is reportedly using the Turing TU116 GPU while the CMP 40HX is using a custom TU106 chip.

The higher-end NVIDIA CMP 50HX and CMP 90HX both have 10GB of VRAM, so it's presumed these will use Ampere GPUs and most likely the GA102 GPU. We should hopefully have the bigger picture once these new Crypto Mining Processors start floating out and into the wild.