NewsReviewsArticlesGuidesGamingAsk the ExpertsNewsletterForums
GIVEAWAY: Sabrent Rocket Q 8TB NVMe PCIe M.2 SSD worth $2000!
CPU, APU & Chipsets
AMD has today dropped its CPU prices once again, in an attempt to steal back some market share from Intel one has to presume. At the same time, AMD had issued EOL's (End of Line) for all of its single core CPU's as well as the low end X2 parts.

Let's start with the price drops, as we're looking at some quite attractive reductions here. As you can see from the picture below, some of the CPU's are dropping as much as US$60 in price and even the top of the range Athlon 64 X2 processors are looking quite tempting. The 6000+ will cost less than the 5600+ did last week. 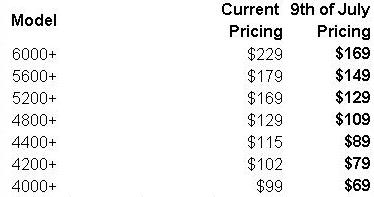 AMD has also killed off the Athlon 64 and its Sempron processors in all but the so called expanding markets. The Athlon 64 X2 3600+ and 3800+ was also give the chop.

With new Intel Core 2 Duo processors arriving shortly, it seems like AMD did a pre-emtive strike with this price drop, let's just hope for AMD's sake, that it's enough to make people buy its processors.