NewsReviewsArticlesGuidesGamingAsk the ExpertsNewsletterForums
GIVEAWAY: Sabrent Rocket Q 8TB NVMe PCIe M.2 SSD worth $2000!
Tweaking & Overclocking
Asus has released the EN8500GT TOP/HTP/256M which is overclocked by 37% straight out of the box. This means that the GPU is running at 600MHz in favour of the default 450MHz core speed. It comes with 256MB of GDDR3 memory at 700MHz, 1,400MHz effectivley.

The card has a DVI, D-Sub and TV-out connector and Asus has fitted an improved cooler to handle the increased GPU speed and Asus claims it runs 18 degrees C cooler than the reference cooler. A copy of Race the WTCC is also supplied in the box. 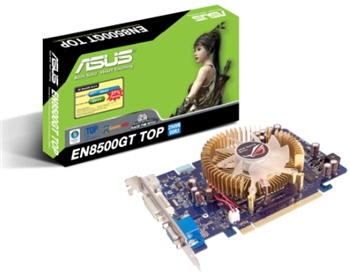