Breaking: It's hhappened... President Trump has been suspended off Twitter for the next 12 hours, after the social networking giant considered 3 of his latest tweets as an attempted coup. 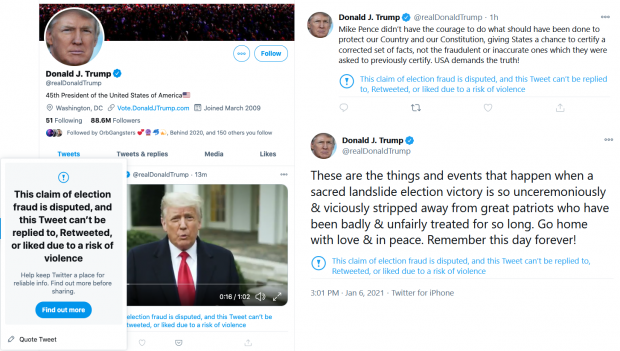 One of President Trump's now-removed tweets, calling for Americans to "go home with love & in peace". If Trump deletes the tweets that triggered Twitter, then they will unlock his accounts. If those tweets are not deleted in the next 12 hours, then his account will "remain locked".

Twitter censored his video calling for peace and for Americans to go home, and leave the Capitol building in DC... not allowing comments, re-tweets or shares of his tweet. It was not long after that, when Twitter locked President Trump's account.

"If the Tweets are not removed, the account will remain locked. Future violations of the Twitter Rules, including our Civic Integrity or Violent Threats policies, will result in permanent suspension of the @realDonaldTrump account".