Seagate's Cheetah series of enterprise SCSI hard disks are reknowned for their sheer awesome performance, spinning at 15,000RPM. But as of today there is a new type of Cheetah hard drive now available; Seagate call it the Cheetah NS, which when first glancing over the specs it oddly spins at just 10,000RPM.

The reason for this is that Seagate deliberately backed off the drive's spindle speed for the sole reason of reducing power consumption (given most of these drives end up running in 24/7 servers which dont utilize all of that 15,000RPM more than 90% of their working life).

The NS series Cheetah has a rather large 400GB capacity (for a SCSI drive) across four platters, and is reported to consume around 34% less power at idle and 33% less during normal operation over Seagate's native 10K RPM drives.

Tech Report have the full scoop on the drive here, but unfortunately no official word on pricing as yet. 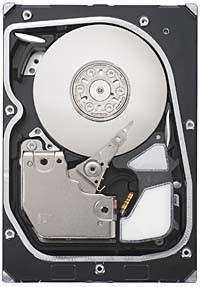 Seagate Today Seagate takes the wraps off a new addition to its SCSI hard drive family designed to increase capacity and reduce power consumption while sacrificing as little performance as possible. This latest drive, dubbed the Cheetah NS, is identical to Seagate's top-of-the-line Cheetah 15K.5 with one important exception: while the 15K.5 spins at 15,000 RPM, the NS only turns at 10,000 RPM. Seagate has essentially backed off the spindle speed of its 15K-RPM product to create a new 10K-RPM offering, allowing the NS to enjoy the best of both worlds.