Microsoft is celebrating some major milestones for Flight Simulator, with the game passing over 2 million players since its launch on August 18, 2020. It is the biggest game launch in Xbox Game Pass for PC history. 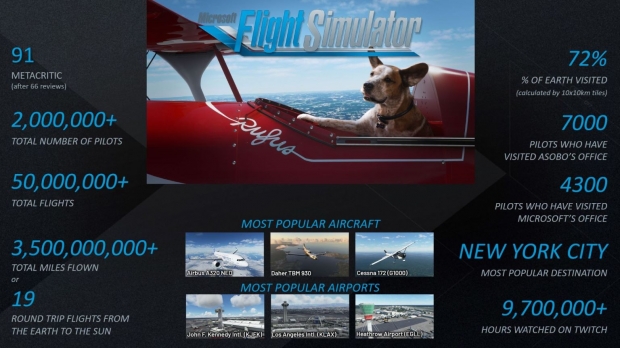 Jorg Neumann, the Head of Microsoft Flight Simulator, wrote a new blog that starts off with saying "on behalf of the entire team, a huge thank you to all the fans who have taken to the skies and are exploring our world while discovering the magic of flight with us".

Neumann continued: "The community have piloted more than 50 million flights and have logged more than 3.5 billion miles flown to date - the equivalent of flying 19 times roundtrip from the Earth to the Sun, or around the world over 400 thousand times. It's been humbling to see the positive reactions to Microsoft Flight Simulator and we feel incredibly fortunate and blessed to have such a highly engaged community that continually helps us improve the simulation with their ongoing and insightful feedback".

"We are also so energized by the community of creators who have already embraced our SDK and developed over 500 airports, aircraft, and other add-ons in the short few months since launch. The quality of work, knowledge and passion on display from creators is an inspiration to our team every day".

Microsoft also reminds everyone that Flight Simulator is coming to Xbox Series X/S in Summer 2021, with the trailer to that below: