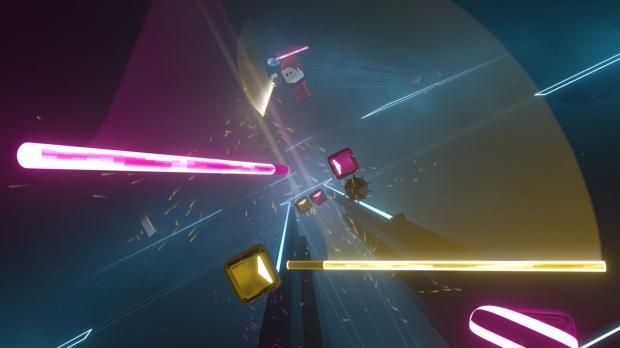 Beat Saber, if you're unaware, is one of, if not the hottest game in virtual reality. An excellent way to describe it would be Dance Dance Revolution meets with Rockband, with lightsabres. It's a simple game that anyone can pick up, but it's a very challenging game to master. Beat Saber has given many people countless hours of calorie-burning entertainment, but it's been a solo experience until now. Now it's a competitive event.

Beat Saber's new multiplayer mode puts you against up to four other players for five-way battle action. The game features a matchmaking system that lets you jump in quickly, but it also allows you to host private matches for you and your friends.

The new multiplayer map is styled like an arena and allows spectators, such as people waiting for the next match or players who've been knocked out can watch the action. In addition to the new multiplayer mode, Beat Game redesigned the UI in Beat Saber that feels less like a traditional 2D interface and more like a futuristic VR interface.

The new Beat Saber update is available now on SteamVR, Oculus Rift, and Oculus Quest. The PSVR version is still in development. The multiplayer is currently limited to like platforms, but the developer is considering cross-play as a future update. Beat Games said this is just the beginning of the changes coming to Beat Saber.