Sampler Feedback Streaming, one of the most important graphics optimization features in the new Xbox console duo, is also coming to PC. 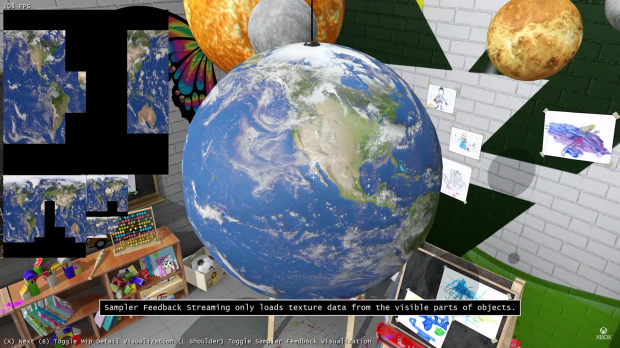 In a recent press event discussing the new Xbox Series S, Microsoft confirmed Sampler Feedback Streaming is a DirectX 12 Ultimate feature and not exclusive to the next-gen console Velocity Architecture framework. That means these optimizations are also coming to PC, which bodes tremendously well for next-gen CPU, GPU, and SSD hardware.

Sampler Feedback Streaming (SFS) is very technical and focuses mostly on texture data, but the gist is that SFS arms developers with much more control over how and when textures are loaded. Instead of loading an entire mipmap texture, SFS allows devs to load just portions of textures that are seen by the player. This reduces overall memory used, speeds up rendering, and frees up bandwidth on the data pipeline--a pipeline that is already astronomically high on PC thanks to enthusiast SSDs like Sabrent's Rocket Plus that hits up to 7GB/sec speeds and higher-end DDR4 RAM.

In tandem with other DirectX features like DirectStorage API, the same tech that powers NVIDIA's innovative RTX IO which bypasses the CPU entirely and lets the SSD feed assets directly to the GPU, SFS will enable insane next-gen PC gaming performance that complements massive gains in GPU power (as with NVIDIA's GeForce RTX 3080 cards), CPU power (as with AMD's new Zen 3 CPUs), and PCIe 4.0 SSDs.