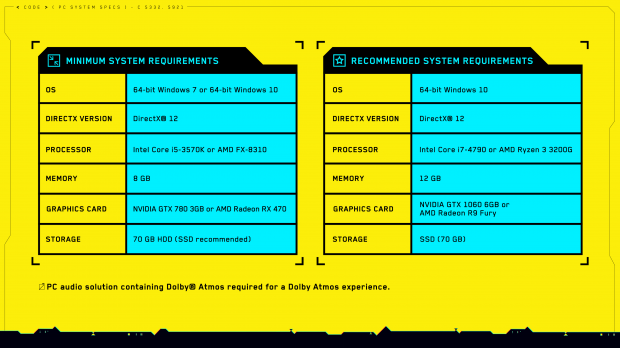 Today CDPR revealed the PC spec requirements for Cyberpunk 2077, and they're pretty lenient. The game covers a wide spectrum of GPU/CPU configs, ranging from a GTX 780 GPU and i5-3570K GPU at the minimum requirement spec all the way to a GTX 1060 and Core i7-4790K at the recommended level. We're not sure what kind of perf the minimum and recommended specs refer to, but expect them to be as low as 720p 30FPS and as high as 1080p 60FPS.

Cyberpunk 2077 requires at least 8GB of RAM and 70GB of install space, and ideally, CDPR wants you to play the game from an SSD.