COVID-19 has disrupted the world, but the video games market has seen massive gains as consumers stay at home and spend on gaming. Nintendo isn't banking on this trend continuing throughout 2020 and is laying out security measures to protect against uncertainties. 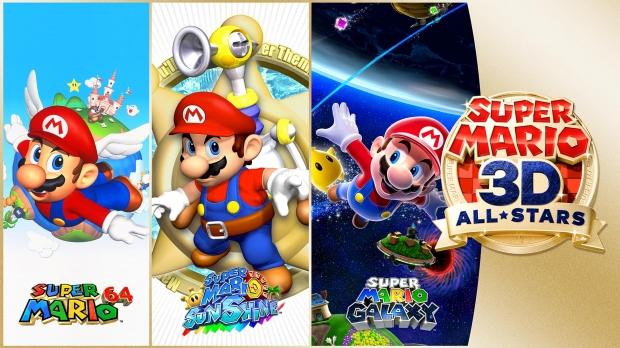 Today Nintendo announced its new Super Mario 3D All-Stars remaster collection will only be sold for six months. After that period it'll be discontinued both on retail shelves and on digital storefronts. This is a targeted business decision from Nintendo and speaks volumes about their conservatism for the FY2021 period. Nintendo is trying to have some sort of insurance to help buffer any kind of major disruption in hardware or software due to COVID-19.

To really understand why they're doing this, we have to take a look at Nintendo's current FY2021 performance.

Q1'21 was the best period in Switch history. This over-performance may have shocked Nintendo to go back into its turtle shell and play things safe.

Nintendo sold a record 5.67 million Switch consoles in Q1, which is more than Q1'17 and Q1'18 sales combined. The Switch is now at 61.44 million units and is the seventh best-selling system of all time. 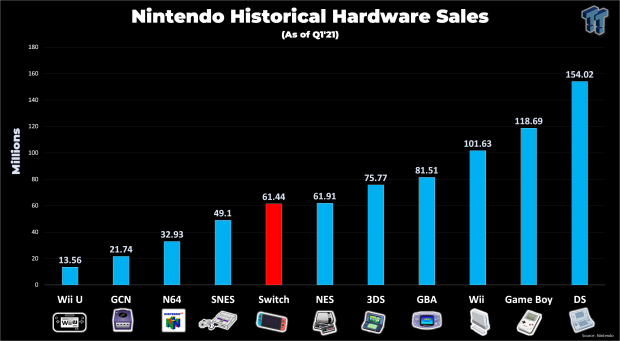 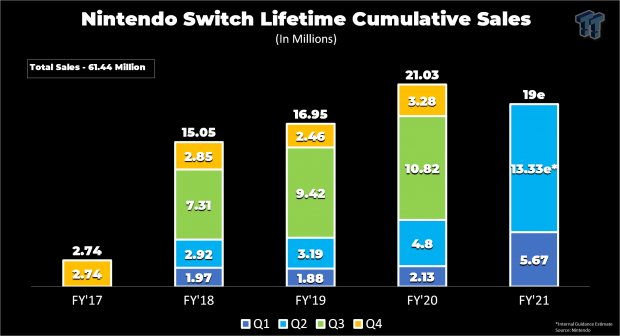 Animal Crossing made up 20% of sales and sold 10.63 million copies in a single quarter. 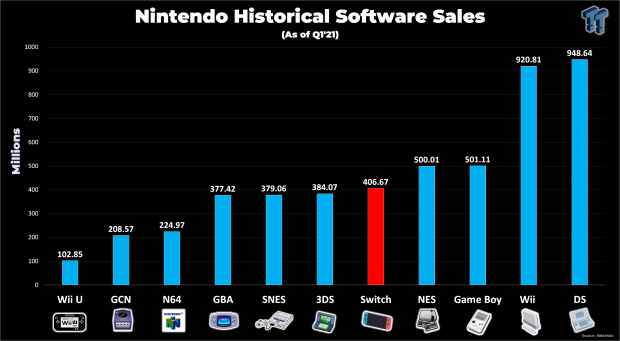 This performance spiked Nintendo's overall profits by over 500%. Net sales were up over 100% and operating profit was up over 400%. 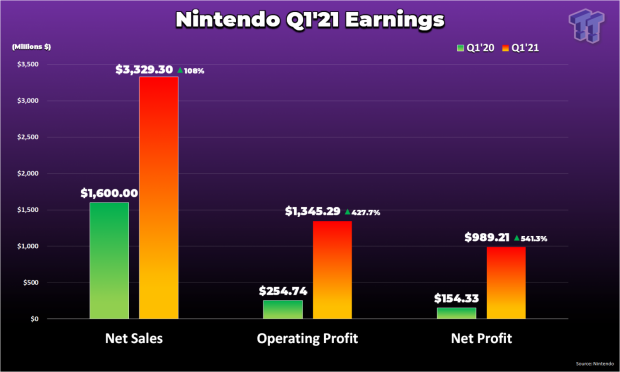 It still expects to sell 19 million Switch consoles in the period. Nintendo always lays out conservative hardware sales but this year could be different due to COVID-19 disruption and massive demand for the console.

Sources say that Nintendo is internally planning to manufacture 25 million Switch consoles in FY2021, but not all of these will be available across the year.

The limited Mario 3D All-Stars run is likely prompted by this shell-shock performance. Nintendo wants to play it safe and wants to manipulate sales as much as it can, moving potential sales directly into the Q3-Q4 slots. Why? Because it's worried, and because it likely wants to try and keep this growth going...but can't trust in the volatility of a COVID-19 market.

Nintendo is no stranger to artificial supply. Back in the 80s, Nintendo carefully doled out supply of NES consoles to key regions to keep demand high throughout the holidays and beyond. The same thing appeared to happen with the NES Classic, but Nintendo affirms it was simple market economics that ate up all supply.

But now Nintendo is actually trying to manipulate the market.

Nintendo isn't creating artificial scarcity to necessarily sell more games overall, but it's doing so to sell games across a certain period.

By making Super Mario 3D All-Stars a product with a limited retail and digital availability, Nintendo has created a targeted and tactical business move that inspires consumers to buy between the September and March period. The game is conveniently delisted right on Nintendo's FY21 cutoff period, which ends March 31, 2021. This isn't a coincidence.

This window of availability actually stretches across three of Nintendo's quarterly periods:

Nintendo wants as much guarantee as possible that Switch users will buy Super Mario 3D All-Stars during these periods. Why? Probably to keep its incredible momentum going. Scarcity leads to more sales and more demand.

The odd thing is that digital games don't have inventory so they can't be scarce. Unless, of course, you discontinue or delist them from sale, which is exactly what Nintendo is doing after March 2021.

Nintendo knows that Animal Crossing's huge sales probably won't continue and it doesn't have any big first-party hits to help buffer the rest of the year. The Mario collection is about all it has. So instead of having games sales push into FY2022, it's targeting FY2021 for the Mario games.

This aligns with reports that Nintendo will release a new upgraded Switch console sometime in early 2021, which is Nintendo's FY2022 period. Nintendo wants to get these Mario games out before the new Switch hits, and before the bevy of new first-party games roll out in that subsequent FY2022 period.

The RPG series turns 35 next year and a bunch of remasters are rumored to launch for the Switch, including Skyward Sword. We'll likely get a remaster collection for Zelda that's just like Super Mario 3D All-Stars.

Ultimately Nintendo is doing this for one simple reason: it wants you to buy games during a specific period. COVID-19, disrupted hardware availability, and upcoming plans have all affected this decision--especially since upcoming plans could also be delayed or interrupted due to COVID-19 issues.