Epic Games is suing Apple for unfair practices, a move that could force an anti-trust investigation into the App Store. But now its motivations become more clear. 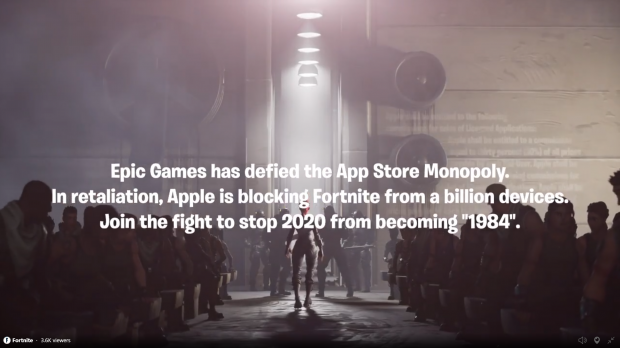 Today Epic Games decided to take Apple, who controls half of the world's mobile market. Epic started the coup by opening its own payment option within Fortnite in iOS, allowing gamers to buy V-Bucks at a 20% discount. This completely eliminated the 30% revenue cut that Apple usually takes. Predictably, Apple removed Fortnite from the App Store. Then Epic fired back with a lawsuit alleging monopolistic behavior.

The case actually makes some good points, and it's possible the courts will set new rules and precedents for Apple. The move was a well-orchestrated and planned maneuver on Epic's part in the guise of freeing developers from the "iOS stranglehold." But the documents reveal there's more to Epic's motivations than goodwill of consumers and developers.

While making its case against Apple, Epic admits that iOS users are more affluent than Android owners, which makes sense given the high markup of iPhones and iPads. Epic says that iOS users "spend significantly more than Android users," which is interesting given Epic is trying to use courts to negotiate a more favorable revenue split, among other things.

Yes, a sub-30% "Apple tax" would benefit everyone that sells games on the App Store, but it'd benefit Epic Games, who makes billions every year from mobile, quite tremendously. Epic Games is now worth $17.3 billion after a recent funding round, and the company managed to make over $3 billion in profits in 2018.

"The iOS userbase is enormous. There are nearly a billion iPhone users worldwide and over 1.5 billion active iOS devices, including both iPhones and iPads.

"Typically, these users will use only iOS devices and will not also use mobile devices with a different OS. In addition to its size, the iOS user base is also uniquely valuable in that its user base spends twice as much money on apps as Android users.

"This is consistent with Epic's experience, as the average iOS Fortnite user spends significantly more on in-app purchases than the average Android Fortnite user. iOS users are therefore a "must have" market for app developers to compete in; an app developer that chooses to develop apps for Android but not iOS forgoes the opportunity to reach over one billion high-paying app users."

Fortnite remains banned from the App Store at the time of writing. There it should stay until Apple and Epic negotiate a deal--which likely won't happen--or until the courts launch an investigation.

Meanwhile, Epic has opened its own marketing campaign calling upon millions of fans to pressure Apple into "freeing Fortnite," and is using dystopian imagery from Orwell's 1984 novel to make a statement.

And it's working. iOS Fortnite players are speaking up, and even Spotify is supporting Epic's antitrust lawsuit against Apple.