NVIDIA has its new Ampere GPU architecture powering the new benchmark crushing Ampere A100 accelerator, and soon to be Ampere-based GeForce RTX 3000 series -- AMD has its RDNA 2 architecture right around the corner and APUs inside of next-gen PlayStation 5 and Xbox Series X... while Intel has, well lots of pluses -- and no GPU.

Intel is expected to finally have something to share on its Xe graphics according to a quickly-deleted tweet. Intel posted the tweet to its official Intel Graphics Twitter account, where it said: "You've waited. You've wondered. We'll deliver. In 20 days, expect more details on Xe graphics".

Keep in mind that Intel has a few events it will be (virtually) attending, with David Blythe, Senior Fellow and Director of Graphics Architecture at Intel delivering a speech at Hot Chips on August 17 all about the Xe GPU architecture. 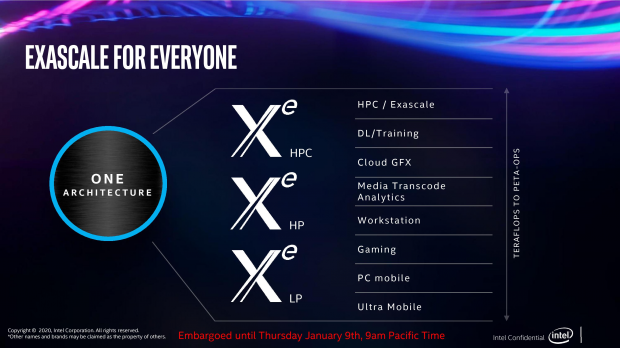 August 17 is very close to the '20 days' tweet that Intel tweeted, because Intel hasn't officially posted it -- maybe they will in the next few days, or even hours. We'll be waiting.