If you know anything about space, you would most likely know that the Hubble Space Telescope is one of the best instruments humans have at capturing the beauty of space.

Above is a tweet from the official Hubble Twitter account, and what is seen in the picture has to be a contender for one of the best snaps of a galaxy Hubble has ever taken. The galaxy we are looking at is named NGC 2275, and from the image we can see that this spiral galaxy has a decent amount of young stars around its outer edge.

NASA describes the galaxy as having a "feathery nature", and points out that at the center of the galaxy there virtually no star formation, indicating that the galaxy is somewhat on the younger side. This gorgeous galaxy is located 61 million light-years away from Earth, which no doubt increases the impressiveness of Hubble's image capturing capabilities. In the entirety of this article, you will find NASA's more in-depth explanation of the galaxy.

NASA: "Millions of bright, young, blue stars shine in the complex, feather-like spiral arms, interlaced with dark lanes of dust. Complexes of these hot, blue stars are thought to trigger star formation in nearby gas clouds. The overall feather-like spiral patterns of the arms are then formed by shearing of the gas clouds as the galaxy rotates. The spiral nature of flocculent galaxies stands in contrast to the grand-design spirals, which have prominent, well defined-spiral arms." 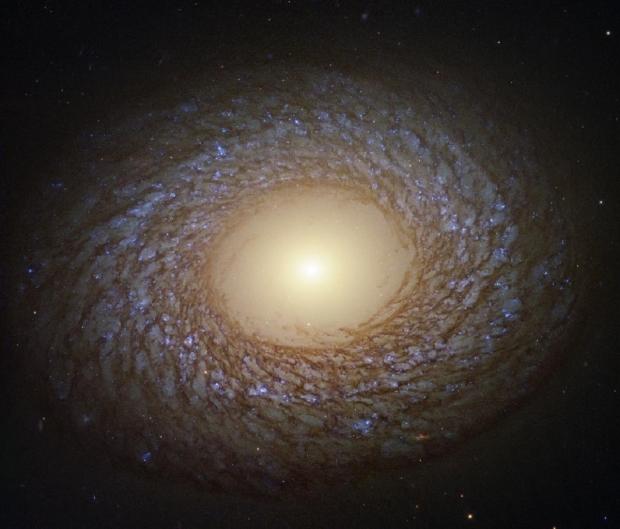