BIOSTAR has unveiled a pair of new H410 series motherboards designed to run the latest 10th generation Intel processors. The boards include the H410MHG and the H410MH. Both boards are aimed at business or casual users and are built with high-grade materials and functionality suitable for different uses. 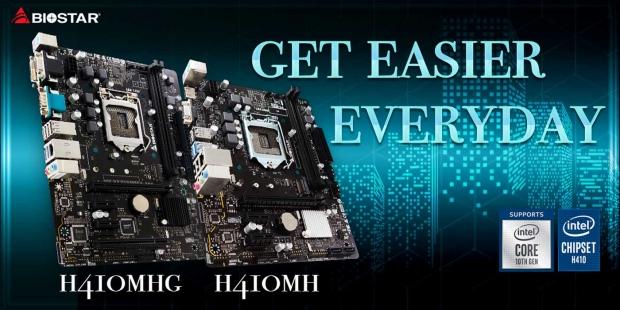 Both boards are designed for the Micro-ATX form factor and feature USB 3.2 Gen1 ports with performance and connectivity needed for multiple devices. Integrated storage technologies include PCIe M.2 10Gb/s, offering 1.8 times more bandwidth compared to the SATA M.2 6Gb/s along with lowered latency.

Both the motherboards support up to 64GB DDR4 RAM with clock speeds up to 2933 MHz. Both also support gigabit LAN. The BIOSTAR H410MHG has TPM technology improving equipment effectiveness with an emphasis on proactive and preventative maintenance and provides a safe working environment. That board is built to suit government agencies and other commercial applications. It also includes a 4K HDMI connector.

The H410MH is fitted with a rear I/O panel that features a pair of USB 3.2 ports, four USB 2.0 ports, and gigabit LAN. It has VGA out and an HDMI output along with an integrated audio codec that supports 7.1 channels. Both of the boards are virtually identical except for the TPM module and additional internal and external I/O ports for the H410MHG. Not long ago, BIOSTAR unveiled a pair of Racing motherboards that included the B460GTA and B460GTQ. The difference in those boards was that one was an ATX form factor, and the other was mini ATX. Full details of the H410MHG can be found here with more information on the H410MH available here.