Since the coronavirus outbreak began, there has been debate about whether or not masks do anything to protect the user. Now, a study has been published that indicates that they certainly do. A new study has been published in the Annals of Internal Medicine, and according to MedicalXpress, a team of international scientists examined a century of evidence, including recent data regarding masks and their efficiency in blocking aerosol contamination of the environment. The team found strong evidence that indicates that cloth and cloth mask severely reduce the contamination of air and surfaces.

First author on the paper, Catherine Clase, an associate professor of medicine at McMaster University and a nephrologist of St. Joseph's Healthcare Hamilton said, "The point is not that some particles can penetrate the mask, but that some particles are stopped, particularly outwardly, from the wearer. Ideally, we would want a mask to work in both directions, protecting the wearer from the environment and reducing the contamination of the environment-air and surfaces-by the wearer."

The study says that a commercial mask that consists of four-layer cotton muslin can reduce all particle transmission by 99%, compared to 96% from contemporary disposable medical masks. As for surface contamination, a mask that consists of three layers (muslin-flannel-muslin) will reduce surface contamination by 99%, total airborne microorganisms by 99 percent, and bacteria recovered from the smaller particles, aerosols, by 88 percent to 99 percent.

If you are interested in reading the study for yourself, a link to it can be found here. 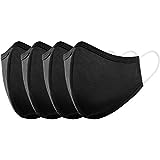