I'd like to preface this comparison by saying it's not nearly as dynamic as I'd like it to have been. There's many other companies that make much more in microtransaction and monetization revenues than the ones listed here. And even the ones listed in the graph come with some caveats, which we'll go over below. 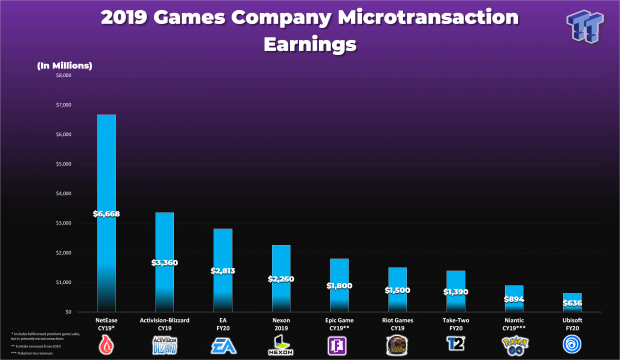 Live services are a billion-dollar business and the GaaS model won't go anywhere anytime soon. It's just too profitable. All of gaming's biggest publishers do it, from overseas titans like NetEase and Nexon to Western giants like Activision and EA. But how much do these games actually make every year? Quite a bit. We've compared some of the top earning companies that monetize both F2P and premium games.

NetEase leads the charge with over $6 billion generated from games in 2019, the bulk of which is from microtransactions, but this also includes full game sales. The company has stated in its filings that a "significant amount" of its games earnings come from monetized F2P titles, so we felt more comfortable including them on the list.

So let's go over the numbers real fast. 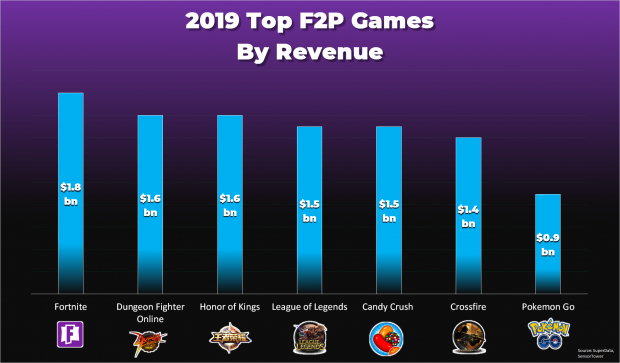 Now lets talk about why some companies didn't show up. The short answer is they don't clearly separate in-game purchases from gaming revenues--and some don't separate gaming revenues from overall services.

Apple, for example, earned a titanic $46 billion from its services segment in 2019. This includes App Store microtransaction earnings from F2P games, but also lumps in subscriptions like Apple TV+ as well as other purchases like movies and apps. So we can't really separate that data without more info from Apple.

"The Company operates various platforms that allow customers to discover and download applications and digital content, such as books, music, video, games and podcasts. These platforms include the App Store, available for iPhone and iPad, the Mac App Store, the TV App Store and the Watch App Store."

Google is in a similar situation. It earned $17 billion in 2019 from its Google Other segment, which includes Google Play. This includes their cut of microtransaction earnings from games on the Google Play store. But without more details we can't properly align the numbers against other companies. We simply don't know how much of that revenue was from actual microtransaction spending vs the other content sold on the marketplace.

The same is true for the PlayStation Network. Sony earned over $3 billion from network services in FY19, but we can't separate that number from full game sales, microtransactions, and subscriptions revenues.

Other games companies are also fuzzy when it comes to very specific numbers.

Chinese juggernaut Tencent made $16 billion from games in 2019, but that includes earnings from full games as well as free-to-play titles.

Like Sony and Nintendo, the Xbox brand makes most of it money from the digital Xbox storefront. Microsoft has a suite of services but also relies on game sales and microtransaction revenues--the company is known for baking live services into its first-party titles. But Microsoft is much, much less transparent than Sony or Nintendo these days, so we can't really dissect the $10.2 billion it earned on a segment level.

Then there's NetEase, the mobile giant who beat Activision's earnings by pulling in $6.667 billion in online game services in 2019. This was driven by massive F2P games like Knives Out, which has made over $700 million since 2018 on mobile.

"All of our mobile games and many of our PC games currently utilize the item-based revenue model. Under this revenue model, our game players are able to play the games for free, but are charged for the purchase of virtual items in the games," NetEase writes in its Form 20-F report from 2019.

But NetEase also distributes many Blizzard games to the Chinese market, many of which like Overwatch a premium titles. So this muddies up their numbers. In short, not all of the money NetEase makes is from its own internal games, and not all of it is from microtransactions. But most of it is. We still don't know a percentage so it's harder to compare to other company earnings.

There's also the Krafton Game Union, which owns Bluehole, the publisher of PUBG. They're private so we don't have any available data there.

Nexon earned $2.26 billion in 2019 from mobile and PC online games. The company notes that microtransactions are likewise the primary driver for their business. But Nexon also sells full premium games, so the numbers aren't exact. 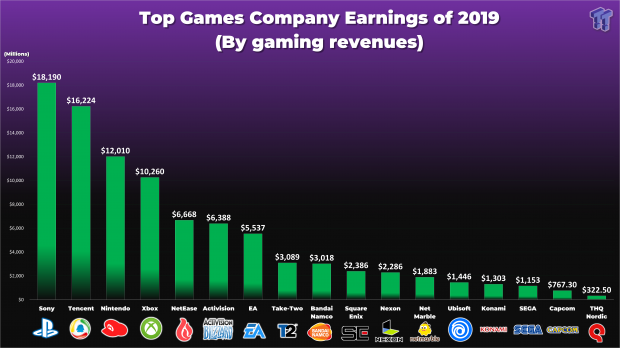