Samsung has announced a new portable SSD that drops into the lineup right below the existing Samsung T7 Touch portable SSD that launched in January. The new storage device is called the Samsung T7, and it promises the fastest transfer speeds currently available using the USB 3.2 Gen 2 standard. 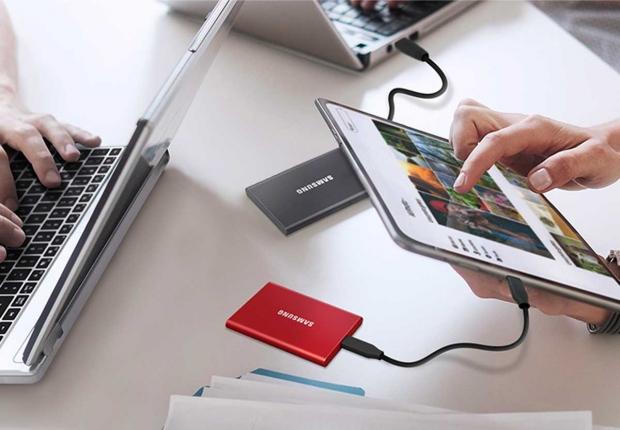 The storage device is available in capacities of 500 GB, 1 TB, and 2 TB and is roughly the size of a business card. The small stature makes it easy to slip into a pocket and take with you on the go. The T7 has read speed of 1050 MB/S and write speed of 1000 MB/S, making it roughly twice as fast as the Samsung T5 portable SSD and up to 9.5 times faster than external hard drives.

The T7 can reach its maximum speed using the NVMe interface, helping to speed up workflows and the transfer of large files. The SSD comes with a USB Type-C-to-C cable and a USB Type-C-to-A cable. The SSD is compatible with Windows, Mac, and Android operating systems.

To keep data on the drive secure, it features password-protected AES 256-bit hardware data encryption. Samsung uses a solid aluminum case that is shock resistant and can survive drops from up to 2m. T7 is also covered by a three-year limited warranty and comes in metallic red, indigo blue, and titan gray. Pricing is $109.99 for the 500 GB, $199.99 for the 1 TB, and $369.99 for the 2 TB drive. All versions are available to purchase now at retailers nationwide and via Samsung.com. Last we talked about Samsung was when new rumors about the Note 20 surfaced focusing on the fingerprint reader and more.