I'm sure most of you will know what "red pilling" someone means, but if not here is the definition of it in the "slang dictionary" of Dictionary.com: "Red pill refers to the truth behind a situation, especially a truth that is difficult to accept".

The site itself even refers to it originating from "1999 cult classic film" -- and one of my favorite movies of all time: The Matrix. Dictionary.com explains: "There's a scene early on in the movie in which the main character, Neo, is offered two pills: a red one and a blue one. The red pill represents an awakening, but one that could be difficult and painful. Neo's world will be changed uncomfortably if he takes the red pill, but he'll be made aware of the truth of the world. The blue pill represents comfort and security. If he takes the blue pill, he'll continue to live in blissful ignorance".

But now there's a war raging on Twitter between Lilly Wachowski, who is the director of the upcoming The Matrix 4 -- as well as co-director on The Matrix Trilogy, and SpaceX and Tesla Motors CEO and founder Elon Musk -- as well as President Trump's daughter, Ivanka Trump.

It all started 9 hours ago (from the time of writing this) where Musk tweeted: "Take the red pill", to which Ivanka Trump responded within an hour saying "Taken!". Lilly Wachowski wasn't happy, where she said "F*ck both of you" out of nowhere. 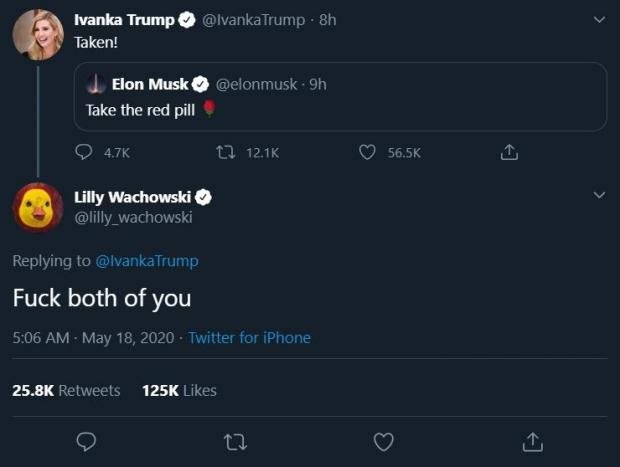