The Motorola razr smartphone hasn't turned out to be a very popular device so far taking flak for a fragile design and few redeeming qualities. One of the biggest downsides with the smartphone is the price for many at $1499.99. That high price tag and issues that have turned up with the device in reviews have made the razr not so popular with buyers.

A lower price tag certainly won't make up for fragile build quality that has seen the screen peel at the fold of some devices or a Snapdragon processor that is slower than other similarly priced devices. However, for those who put more value on style than performance and want to be the first among their friends to get a folding device, the special deal may be precisely what they're waiting for.

The Motorola razr is available in noir black or blush gold with 128 GB of storage. One potential caveat for the deal is that the smartphone is available only on Verizon. Motorola does note that buyers can pay as low as $42 a month with 0% APR if they qualify. The promotion is good while supplies last or until May 10, 2020. Anyone taking advantage of the deal should know that if they want both smartphones in the same color, they have to adjust the quantity to 2 units in the shopping cart according to Motorola. The Razr was first announced in November 2019. 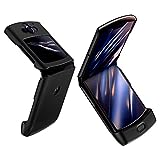