Riot Games' new hero shooter Valorant is putting speed and accuracy over everything else, and the devs promise servers with 128Hz tick rates for ultra low-latency chaos.

Today Riot Games officially announced Valorant, it's new free-to-play 5v5 hero shooter due out in Summer 2020 that has lofty ambitions of ruling the competitive FPS market. Valorant is kind of a mix between Overwatch, with its 10 hero characters with unique abilities, and also channels Counter-Strike: Global Offensive's precise gunplay.

"Here's what we think it takes for you to trust a game enough to invest: 128-tick servers, at least 30 frames per second on most min-spec computers (even dating back a decade), 60 to 144 FPS on modern gaming rigs, a global spread of datacenters aimed at <35ms for players in major cities around the world, a netcode we've been obsessing over for years, and a commitment to anti-cheat from day one," Riot said on Valorant's main page.

Valorant also has ultra-accurate gunplay to match this speed. The targeting reticles are tight and don't change colors when highlighting an enemy, and headshots are extremely lethal. The TTK is also pretty low and makes for very tense firefights.

Right now the alpha test has 17 different guns that are purchased at the beginning of each round, similar to CS:GO. 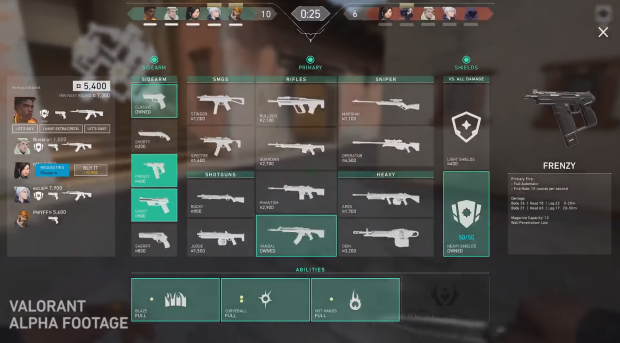 Another huge part of Valorant is just how flexible it is. The game is seriously lenient with its spec requirements and will even run on Intel HD 3000 graphics at 30FPS.

Riot has issued the following PC spec requirements for Valorant: