The FBI has reported the highest amount of scammed losses in 2019 since it's Internet Crime Complaint Center was created. 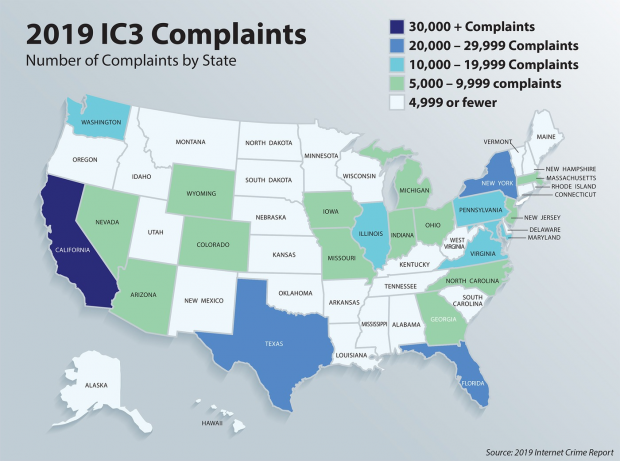 According to the FBI.gov website, the internet safety arm of the FBI called 'Internet Crime Complaint Center' (IC3) issued out their 2019 report, which stated some worrying figures. The report says that during 2019 the IC3 received 467,361 complaints, which equated to an average of nearly 1,300 a day. It also recorded the highest amount of monetary losses since the center was established back in May, 2000.

The FBI says that more than $3.5 billion losses were recorded from individuals and businesses who fell victim to online scams. Scams such as phishing, non-payment/non-delivery scams, and extortion were the most common form of received complains. The complaints which ended up being the most financially costly were business email compromise (BEC), romance or confidence fraud, and mimicking the account of a person or business vendor.

Donna Gregory, the chief of IC3 said that throughout 2019 there wasn't an overall increase in the amount of attempted scams, but instead criminals thought more outside of the box and became more "sophisticated".

Here's what she said, "Criminals are getting so sophisticated.It is getting harder and harder for victims to spot the red flags and tell real from fake. You may get a text message that appears to be your bank asking you to verify information on your account, or you may even search a service online and inadvertently end up on a fraudulent site that gathers your bank or credit card information."

Gregory says that the best way to stop these scams happening to you is to be extremely skeptical and make sure to double check everything. She also states "In the same way your bank and online accounts have started to require two-factor authentication-apply that to your life. Verify requests in person or by phone, double check web and email addresses, and don't follow the links provided in any messages."

The FBI Career Guide: Inside Information on Getting Chosen