The mysterious slot in Xbox Series X's prototype is actually a CFExpress port, not a debugging port, hinting the console will support portable memory cards for expanded memory. 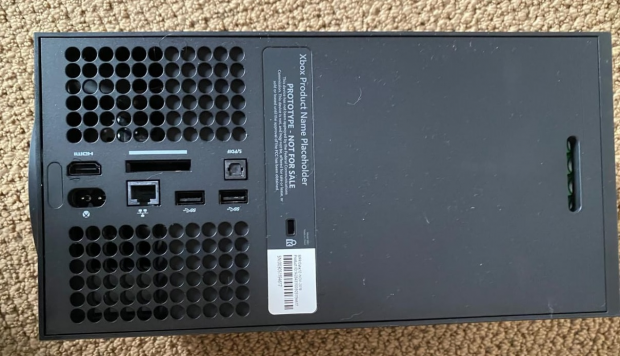 The Xbox Series X may support external memory cards on the CFExpress standard, sources tell Thurrott's Brad Sams. CFExpress memory is primarily used in high-end camera memory cards, and utilizes PCIe 3.0 across NVMe for transfer speeds up to 4GB/sec. This matches up with the Xbox Series X's maximum SSD speeds. There are plans to update CFExpress to support PCIe 4.0 as well.

If the port is retained in the final hardware, console memory cards are coming back in a big way. Gamers will be able to buy CFExpress memory cards to expand storage without compromising speeds. Hooking up an older mechanical HDD or even a slower SSD to the Xbox Series X will cause speed discrepancies and possibly impact performance, but CFExpress storage will match the internal SSD quite well.

CFExpress performance speeds, as per Wikipedia.

We actually know a fair bit about the Xbox Series X's high-speed SSD. It's built on Phison's E19T memory controller, which allows for up to 3.7GB/sec sequential read and write speeds. This is the theoretical ceiling for data transfers on the controller itself, so it's possible the Xbox Series X's speeds will be lower.

The Phison E19T chip is also made specifically for DRAM-less SSDs, which are typically cheaper. Microsoft will instead include a special DRAM chip (a Host Memory Buffer) on the console itself dedicated to mapping data for the SSD. Finally, the Phison E19T controller also supports CFExpress, hence the inclusion of that strange port in the back.

There's some big problems with going with CFExpress, though.

First off, the cost.

These memory cards are expensive. A SanDisk CFE card with 512GB of storage that delivers 1.7GB/sec reads and 1.4GB/sec writes costs $599. Microsoft could team up with an OEM to make specially-branded cards, but this would likewise be expensive on Microsoft's part.

Microsoft would have to develop an easy-to-use solution that lets users transfer their games from existing mechanical HDDs/expandable storage to the new CFExpress memory cards. Lots of Xbox owners have expanded storage that houses the bulk of their digital libraries; those need to be easily transferrable to any new medium/storage for play on the Xbox Series X.

And since we know the Xbox Series X will play all existing Xbox One games, the need for such a solution is persistent.

All in all, I'm betting the CFExpress slot is for developers and we may not actually see it roll out in final Xbox Series X hardware. If it is included, I'm wondering how Microsoft will tackle this.

Will they make their own proprietary storage solutions specifically optimized for the Xbox Series X? If so, will anyone buy them? Remember, these cards are expensive and are typically designed at high-end cameras and the like, not everyday consumers. Anything dealing with mass-market hardware needs to be accessible and cost-friendly, even if it's a more enthusiast-grade system.