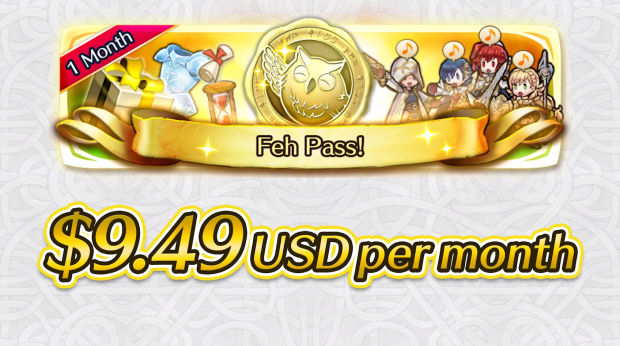 Nintendo today announced yet another paid monthly subscription service for its mobile games. The latest free-to-play mobile game to get a subscription is Fire Emblem: Heroes with its new Feh Pass. The Feh Pass costs $9.50 a month and unlocks goodies every month for players, including some pay-to-win mechanics like the new re-act function or auto-start.

This is Nintendo's third time rolling out a subscription pass for a mobile game. First we saw the Mario Kart Tour Gold Pass for $5 a month, then two subs for Animal Crossing: Pocket Camp--the $2.99 Happy Helper sub, and the $7.99 Cookie and Depot plan.

"In exchange for a set monthly fee, subscribers of the Feh Pass can enjoy access to five special benefits," Nintendo said in the announcement video. "Subscribers may get access to two Resplendent Heroes each month, and use four gameplay-enhancing perks in the subscription period."

This extra layer of monetization is on top of the gacha-style microtransactions that've helped Fire Emblem: Heroes rake in over $650 million to date. Fans are predictably not too happy about the Feh Pass, but I expect it to do quite well, especially in mobile-dominated regions like Japan.