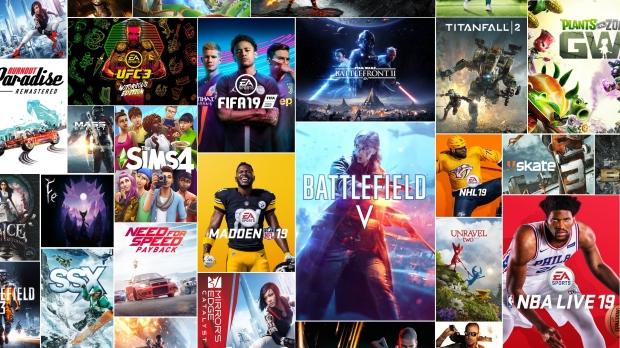 EA's recent Q3'2020 earnings call was jam-packed full of info on the company's future plans. We know a new Battlefield game is set for FY2022, and that EA is now open to making more singleplayer Star Wars games. Now we have insight into it's upcoming pipeline for next-gen console launches in 2020.

The billion-dollar publisher plans to release no less than 14 games total in Fiscal Year 2021, which folds into the PS5 and Xbox Series launches in Holiday 2020: four sports games, including Madden and FIFA, four mystery titles, four published indies, and two mobile games. It's the mystery titles in the middle that piqued our interest.

"Looking forward to Fiscal 2021 our goal is to grow net bookings and underlying profitability, even as we invest in new platforms. We anticipate live services to be the primary growth driver, followed by the launch of new content across a broad range of genres," EA CFO Blake Jorgensen said in the recent earnings call.

"We're launching four sports titles, including new games in our blockbuster FIFA and Madden franchises, four other titles that draw from the breadth of our IP, and we'll also publish four titles globally from smaller developers. Finally we expect two new mobile titles to make it into soft launch."

Based on this, and what we know about EA's business model, we'll likely see a mix of singleplayer and online-based games in FY2021.

It's possible Jedi: Fallen Order 2 will be among these games, or maybe, just maybe, BioWare's new Dragon Age 4 game (sadly this isn't likely as EA pinned DA4 for its FY2023 timeline, a year after Battelfield 6's release timing). There's hopes of a Mass Effect remaster but this could be overkill for BioWare, a company who's notorious for taking on intense crunch.

Maybe the premium Titanfall experience Respawn has been working on, complete with next-gen console support?

Respawn's Vince Zampella is also leading DICE LA now, and that team is incubating new projects that has EA pretty excited. Perhaps these are new IP that'll manifest in time?

EA's Blake Jorgensen goes on to say how important catalog sales are for the company's business. The idea is that EA will plant seeds now that will continually grow and make money throughout the years; planting the seed of a live service game now could reap millions across a five-year timeline, for example. It also goes with singleplayer games like Mass Effect, a franchise that's still generating sales over a decade later.

Whatever EA is working on, the company has a big multi-year plan to stretch their IP, live services, and singleplayer endeavors across the new generation of systems.

Jorgensen teases that next-gen consoles will allow devs to do mind-blowing things, and EA CEO Andrew Wilson promises the publisher will be ready when next-gen is here.

"New consoles are coming and we'll be ready to lead with some of our top titles," EA CEO Andrew Wilson said in the company's recent Q3'20 earnings call. "We have really strong traction on the next Battlefield game and I'm really excited about it."