Joe Biden, the former Vice President (to President Obama) and now 2020 candidate for President of the United States, has illuminated us on his thoughts on game developers in Silicon Valley.

The beyond out of touch Biden was interviewed recently by The New York Times, where he was asked about the Obama administration and its legacy on Silicon Valley regulation. Biden commented on this subject about his talks with Silicon Valley leaders and their discussions on intellectual property rights, where he talked about a discussion he had with a game developer.

Biden, in his own words, said that this unnamed game developer was "one of the little creeps" that makes games that "teach you how to kill people". Biden continued: "And at one point, one of the little creeps sitting around that table, who was a multi- - close to a billionaire - who told me he was an artist because he was able to come up with games to teach you how to kill people, you know the - -".

At this point, the reporter interrupted Biden to make sure he was indeed talking about video games, and the former VP and 2020 candidate for POTUS agreed. He continued, using the words "righteous" and "overwhelming arrogance" in describing people who work in technology and game development in Silicon Valley.

Biden continued: "And then one of these righteous people said to me that, you know, 'We are the economic engine of America. We are the ones.' And fortunately, I had done a little homework before I went and I said, you know, I find it fascinating. As I added up the seven outfits, everyone's there but Microsoft. I said you have fewer people on your payroll than all the losses that General Motors just faced in the last quarter, of employees. So don't lecture me about how you've created all this employment".

He added: "The point is, there's an arrogance about it, an overwhelming arrogance that we are, we are the ones. We can do what we want to do. I disagree".

I think Biden needs to sit down, and just chill. 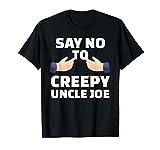