Microsoft has announced a new climate change imitative that plans on saving the planet from the ever-growing concerns of climate change. 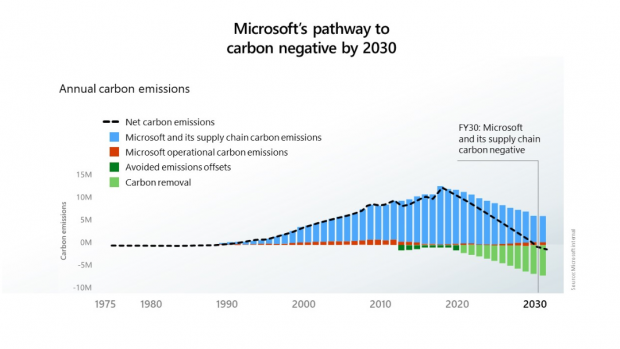 In Microsoft's announce the company states that it plans to be "carbon negative" by the year 2030 and on top of that it plans on removing any carbon its created as a company since its fruition in 1975. The company has said that it will be pledging $1 billion to its "climate innovation fund" to assist its "aggressive program" aiming towards minimalizing climate affects. Microsoft CEO Satya Nadella said, "The scientific consensus is clear. The world, today, is confronted with an urgent carbon crisis. If we don't curb emissions and the temperatures continue to climb, the science tells us the results will be devastating."

Nadella continues and says, "Each of us is going to need to take action, and that includes businesses. No one company can solve this macro challenge alone, but as a global technology company, we have a particular responsibility to do our part. That's why today we're announcing an ambitious new plan to help address the sustainability of our planet." By Microsoft's "carbon negative" definition, the company plans on removing more carbon that it's emitting per year.

To do this the company has said that it will work with the "best available science and most accurate math" to "accelerate carbon reduction and removal opportunities."